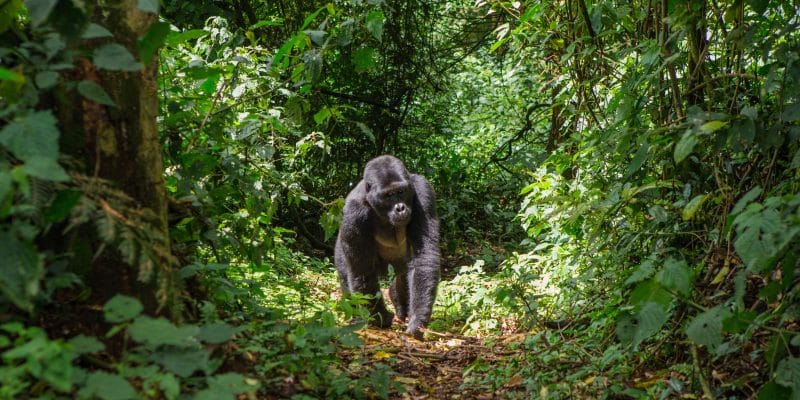 The Congolese Institute for Nature Conservation (ICCN) is warning about the situation of the mountain gorillas in Virunga National Park, in the north-east of the Democratic Republic of Congo (DRC). The M23 rebel group has set up its rear base in the area of the park occupied by the mountain gorillas, making it impossible to monitor the primates.

In the northeast of the Democratic Republic of Congo (DRC), insecurity is negatively affecting the survival of mountain gorillas in the Virunga National Park. In a statement issued on 20 December 2022 by the Congolese Institute for Nature Conservation (ICCN), which manages the park, the M23 rebels are presented as the main threat currently facing the mountain gorillas in Virunga National Park.

“Currently, the mountain gorilla area (below Mount Mikeno in the south of the park, where 234 mountain gorillas live, i.e. a third of the world population of the species, editor’s note) is occupied by the rebels and this delicate security situation does not allow our teams to deploy there”, worries Bienvenu Bwende, the Virunga National Park spokesman. For nearly six months, the Virunga National Park rangers have not had access to these rare species. “In August 2022 we lost a silverback gorilla at Gikeri, because the monitoring of the gorillas was interrupted because of the war. There were no guards following the gorilla to see how it was doing in the field,” said Didi Mwanaki, a ranger with ICCN.

The M23, a predominantly Tutsi armed group (an ethnic group from neighbouring Rwanda) defeated in 2013, took up arms again in late 2021 and stepped up its offensive in October 2022, seizing large swathes of territory north of Goma, the capital of North Kivu.

Created in 1925, Virunga, the oldest natural park on the African continent, has thus become a collateral victim of the war and violence in North Kivu, even though it is a jewel in the crown of Congolese, African and world heritage. The site has been a UNESCO World Heritage Site since 1979. It is a rich ecosystem. According to the park management, more than 50% of Africa’s terrestrial species are represented there.