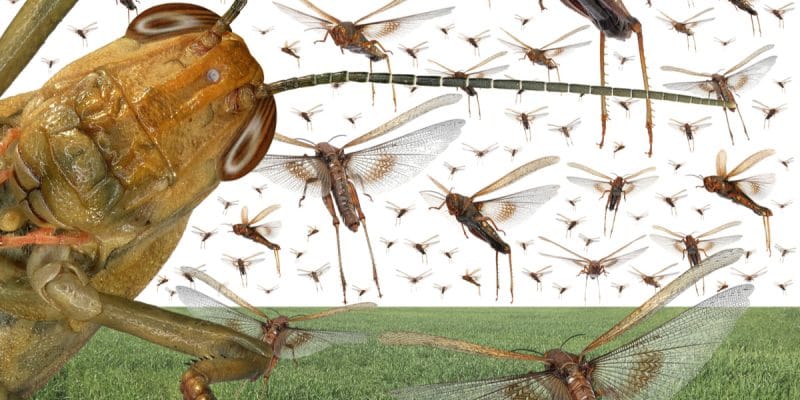 The Ituri province in eastern Congo, neighbouring East Africa, has just been hit in turn by the invasion of locusts. The fight against these insects - capable of devouring up to 400,000 tonnes of plants a day - is not without danger for the environment. The tons of pesticides used to preserve crops expose soils and rivers to serious pollution.

Farmers in Aru and Ituri in eastern DRC have been in panic since February 19, 2020, when some of the locusts were first seen in the foliage. The state of mind of the populations in these localities is understandable, given the damage committed by these insects in East Africa (Kenya, Ethiopia, Eritrea, Djibouti, Somalia, Sudan, Tanzania and Uganda). According to experts, in this neighbouring sub-region of the DRC, swarms of voracious insects travel 150 kilometres a day, devouring 400 000 tonnes of plants in the process.

“What troubles us a lot is the damage these insects are going to cause to crops. People will lose their crops. Their fields will be devastated. We risk having nothing to eat in the town of Bunia and in Ituri in general,” said Dieudonné Lossa, president of the Union of Agricultural Engineers in Ituri. Beyond the threats to food security, the spread of locusts will cause environmental damage.

Combating the locust invasion, a threat to biodiversity

No government action has yet been taken to thwart the locust invasion in eastern Congo. The authorities are awaiting the conclusions of the situation assessments being carried out in the locality of Aru.

In East Africa, where the invasion has been occurring since December 2019, the most common control measure is to apply pesticides to plants by aeroplane. Once the plants have been treated, the insects have two alternatives: either leave or eat and die.

“But spreading pesticides, which are generally chemical, over large areas exposes the region to an environmental disaster,” warned Cyril Piou, a researcher at the International Centre for Agricultural Research for Development (CIRAD). Chemical pesticides are indeed harmful to soils, groundwater and aquatic fauna.

A study by the World Wildlife Fund (WWF), published on February 12, 2020, nevertheless indicates that it is in the interest of States to protect biodiversity. According to this study, if nothing is done, the progressive disappearance of ecosystems will cost at least 479 billion dollars per year at the global level, i.e. nearly 10,000 billion dollars by 2050.

Yet the use of pesticides is still a topical issue, as countries are still affected by the locust invasion. For governments are quickly making the choice between preserving food security (direct protection of human life) and preserving biodiversity.