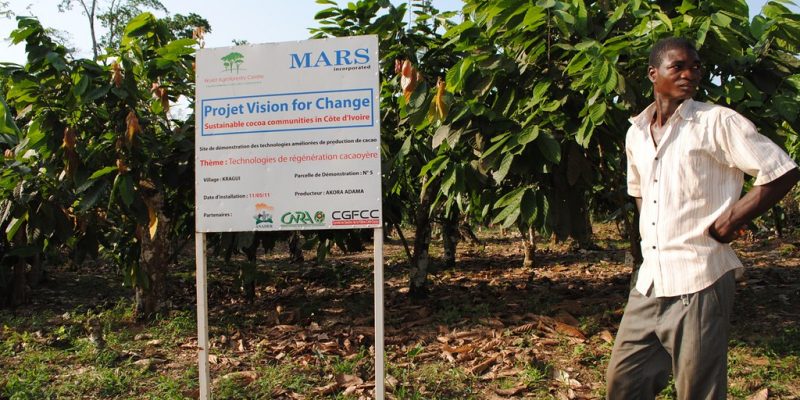 The Board of Directors of the Green Climate Fund (GCF) has recently approved new funding for Côte d'Ivoire. The $11.8 million loan is for the sustainable cultivation of cocoa, Côte d'Ivoire's main export commodity.

As the world’s largest producer of cocoa beans, Côte d’Ivoire faces many challenges related to intensive agriculture, including deforestation. With the support of the Food and Agriculture Organization of the United Nations (FAO), the country is implementing the project “Promoting Deforestation-Free Cocoa Production to Reduce Emissions in Côte d’Ivoire” (abbreviated PROMIRE in French), which has recently received $11.8 million from the Green Climate Fund (GCF).

This pilot project is designed to help a local cooperative of organic cocoa producers in the La Mé basin improve their access to fair trade markets while slowing the loss of forest cover. In the long term, the Promire project aims to introduce low-carbon agro-forestry practices on 3,650 hectares to encourage 600,000 smallholders in the Agnéby-Tiassa, La Mé and Sud-Comoé regions in the southeast of the country to make changes that will benefit them.

According to the Food and Agriculture Organization of the United Nations (FAO), Côte d’Ivoire has one of the fastest rates of forest loss in the world and, apart from the national parks, there is almost no intact forest left in the country. About two-thirds of deforestation is attributable to agriculture, with cocoa production accounting for one-third. “The situation is exacerbated by the clearing of land for cocoa cultivation in full sun, a strategy favoured by poorly organised smallholders who often lack secure land rights, to the detriment of shade-growing, which produces lower yields in the short term but is more biodiversity-friendly, water-saving and environmentally sustainable,” explains FAO.

According to researcher Traoré Kassoum of the Péléforo Gon Coulibaly University in Korhogo, Côte d’Ivoire’s forest cover was estimated at 16 million hectares at the beginning of the 20th century. Nowadays, only about 2.5 million hectares remain; a drastic drop in the forest cover of Côte d’Ivoire that led to the project “Promoting Deforestation-Free Cocoa Production to Reduce Emissions in Côte d’Ivoire” (PROMIRE). The financing provided by the Green Climate Fund (GCF) will also promote the diversification of agricultural land use beyond cash crops (cocoa) to include food crops such as plantain and cassava, the redevelopment of coffee plantations, and the planting of trees for other uses.

As part of this ecological agriculture project, the FAO intends to seek support “from investors who demonstrate a stronger commitment to sustainability, especially given that the cocoa sector as a whole may face a sharp decline in production from one of the world’s largest producers if nothing is done to mitigate climate change”. According to the United Nations (UN), PROMIRE is the first project on Reducing Emissions from Deforestation and Forest Degradation (REDD+), approved in Africa and globally under the streamlined approval process of the GCF.

TOGO: A 10-hectare reforestation operation launched in the south of the country