Homepage » COP27: Rwanda launches $104m green economy fund
This article is part of the dossier
COP27: WHAT ARE THE CHALLENGES FOR AFRICA AT A TIME OF CONCRETE SOLUTIONS 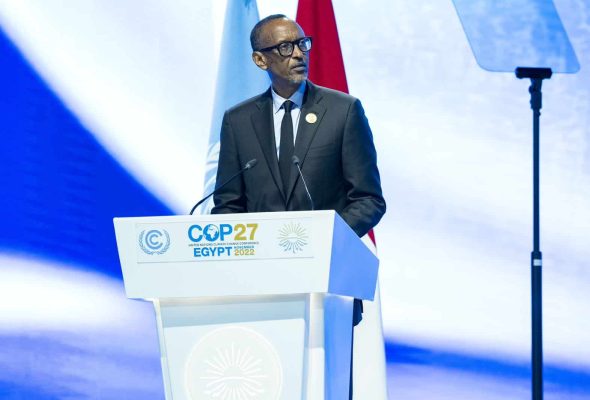 The Government of Rwanda will strengthen its support to the private sector, particularly in the implementation of climate-friendly economy projects. On 7 November 2022, Rwandan President Paul Kagame launched a $104 million fund at the Rwandan pavilion at the 27th United Nations Climate Change Conference (COP27) in Sharm-el-Sheikh, Egypt. The green investment facility called “Ireme Invest” will provide financing for the implementation of green and resilient projects in Rwanda. The aim is to accelerate the transition to a low-carbon economy in the East African country.

The fund will target projects in key sectors, including renewable energy deployment (solar and hydro), improving energy efficiency in industrial processes, introducing vehicle emission standards, deploying electric vehicles and promoting the use of biogas on farms. “Climate adaptation requires big changes in the way the world produces and consumes energy, in the way people move, in what they eat and in the way it is grown,” said President Paul Kagame at the launch of the Ireme Invest fund.

The Development Bank of Rwanda (BRD) has invested seed capital in the fund. BRD, which builds on a strong track record of the Rwanda Green Fund (FONERWA). According to Paul Kagame, the governments of France, Sweden and the United Kingdom, as well as the European Investment Bank (EIB) and the Green Climate Partnership Fund have also invested in the Green Investment Facility.

The new green investment fund is expected to enable the East African country to move forward with the implementation of its climate strategy unveiled in 2020. Rwanda’s plan includes 10 projects worth $2.4 billion planned by the Rwandan government to meet the Paris Agreement’s 2030 targets. One of these targets is the reduction of greenhouse gas (GHG) emissions. In 2015, these emissions were estimated at 5.3 million tonnes in Rwanda. Experts estimate that they could double by 2030.