Homepage » COP27: Huawei calls for a standard to measure network energy consumption
This article is part of the dossier
COP27: WHAT ARE THE CHALLENGES FOR AFRICA AT A TIME OF CONCRETE SOLUTIONS 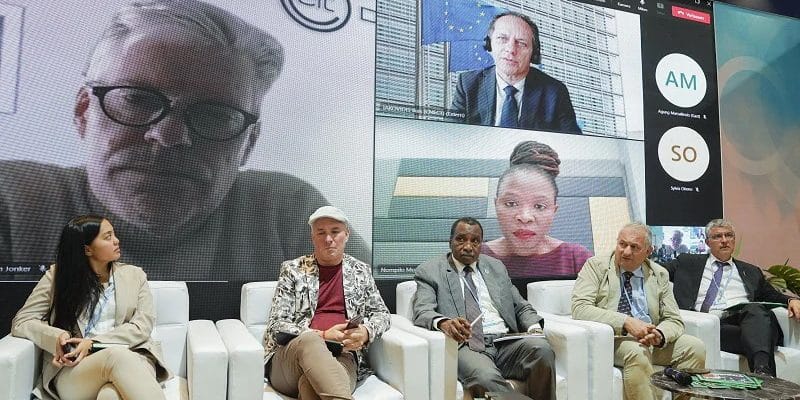 The 27th United Nations Climate Change Conference (COP27) in Egypt is all about solutions. And from Sharm el-Sheikh, Huawei is calling for a standard to measure the energy consumption of networks, in a global context marked by the adoption of energy sobriety. The proposal to help decarbonise information and communication technology (ICT) was presented along with a range of digital solutions for sustainable development at the ICT for Green conference organised by the United Nations Framework Convention on Climate Change (UNFCCC) UN Climate Change Global Innovation Hub(UGIH).

Measuring the energy efficiency of networks is a necessity for the decarbonisation of information and communication technologies (ICT). This is the idea supported by Huawei at the “ICT for Green” conference organised by the United Nations Framework Convention on Climate Change (UNFCCC) UN Climate Change Global Innovation Hub (UGIH), on the sidelines of the 27th United Nations Climate Conference (COP27). The technology giant called for a standard to measure the energy consumption of networks.

The idea of a standard for enhanced energy efficiency is supported by the International Telecommunication Union’s (ITU-T) Telecommunication Standardization Sector Study Group, of which Huawei is a member. Specifically, the standard approved on 22 October 2022 as “L.1333” defines a key performance indicator called network carbon energy intensity (NCIe). This indicator should continuously measure the energy efficiency of telecommunication networks. The call comes as the African continent prepares to welcome the fifth generation of mobile phone networks (5G), of which Huawei is a global pioneer.

And for Philippe Wang, the Executive Vice President of Huawei Northern Africa, with the evolution of the technology, 5G wireless base stations can automatically turn off when there is no data traffic, thus saving energy. This is a significant advance that should ultimately help reduce the carbon footprint of networks. As part of this approach, Huawei has also introduced a new generation of green 5G antenna that can cover an area of up to 500 metres using half the transmission power. This reduces energy consumption by 30%, notes Philippe Wang.

Beyond the decarbonisation of networks, digital technology should above all accompany all sectors for a just transition. For Luis Neves, CEO of the Global Enabling Sustainability Initiative (GeSI), one of the panelists at the “ICT for Green” conference, “if we combine the spirit of sustainability with digital technology, I think we can create a powerful machine to advance the sustainability agenda and accelerate the path towards a world where 10 billion people can live in good health”.

The goal by 2030 is to help reduce emissions by 20% through ICT. Huawei is also focusing on innovation in the agricultural sector to achieve the SDGs. “We are equipping tractors with sensors that can cross the field almost automatically by following the tractors’ route,” says Huawei. The aim is also to rationalise water consumption in the face of drought, as the Mediterranean countries in Africa are one of the most affected on the continent. It should be remembered that the agricultural sector, which consumes 70 to 80% of water resources, is the one most affected by the decline in water availability.

Another solution developed by Huawei is “Smart Irrigation”. Presented by Adnane Ben Halima, Huawei Northern Africa’s Vice President of Public Relations in the forum “How can technology transform agricultural ecosystems?”, published on AFRIK 21 on 13 June 2022 as an initiative using 5G, cloud, artificial intelligence and big data, it allows for remote, precise and smart irrigation, using the right amount of water to ensure better crop productivity in Morocco, thus reducing the risks of food insecurity.

While digital transformation in agriculture faces many challenges such as the lack of infrastructure in rural areas, investment, agro-innovation and agricultural entrepreneurship, it is a major lever for economic growth and agricultural productivity.

This is a vital issue on a continent whose population is set to double by 2050, rising from one billion inhabitants in 2019 to nearly 2.4 billion in less than thirty years.

The Chinese company is also present in Africa through solar projects. In Ethiopia, for example, Huawei has deployed 400 solar hybrid sites. “These sites reduce carbon emissions by 2,800 tonnes each year,” explained Philippe Wang, the Executive Vice President of Huawei Northern Africa. Also in the energy sector, Huawei signed two agreements in March 2022 with the companies Unitel in Angola and Meinergy Technology in Ghana, as reported by Huawei on its website.

With regard to the Angolan mobile phone company, Unitel, Huawei will rethink its network by reducing the number of CO2-emitting diesel generators (partly responsible for global warming) and introducing solar photovoltaic systems and lithium batteries. The aim is to “reduce the time spent by its teams on diesel generators by up to 75% and its operating costs by 40%”. Other projects are likely to be discussed at the Energy and Solutions Days in Sharm el-Sheikh, Egypt.

Like Huawei, companies at the ICT For Green conference stressed the need for Africa to be greener and fully connected to reap the benefits of smart solutions. Particular emphasis was placed on collaboration and education as key drivers for a greener future. “Collaboration between businesses and governments brings more opportunities for solutions, promotes the business ecosystem that serves to share and reduce carbon emission,” said Philippe Wang, the Executive Vice President of Huawei Northern Africa.

On the education front, Huawei is facilitating access to ICTs worldwide, particularly in Africa through training for young people. In Egypt in particular, the company is working with the government through the ITB and ongoing weekly banking programmes. Ultimately, the programme aims to create ICT talent in the land of the pharaohs.