Homepage » COP27: Environmental activists’ frustration at the end of the first week

COP27: Environmental activists’ frustration at the end of the first week 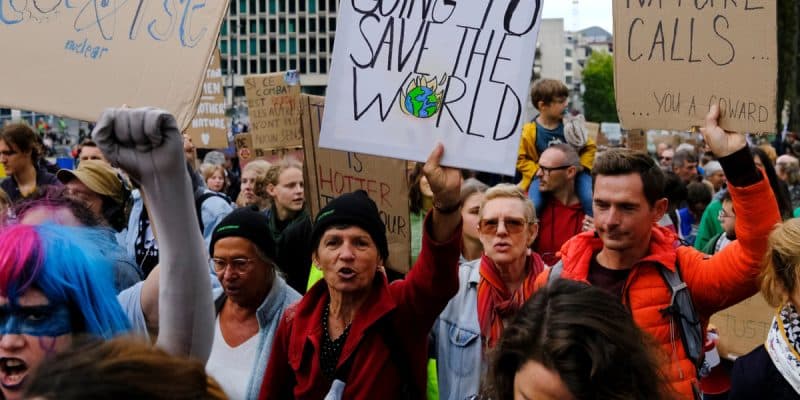 After a week of work at the 27th United Nations Climate Change Conference (COP27), climate activists are denouncing the inaction of the governments gathered for the summit in Egypt to tackle climate change. An Egyptian symbol was attacked in a museum in Barcelona, Spain.

Due to the ban on demonstrations in Egypt during the 27th United Nations Climate Conference (COP27), environmental activists are carrying out actions from abroad to voice their demands. On 13 November 2022 at the Egyptian Museum in Barcelona, Spain, two young activists, a man and a woman from the Futuro Vegetal collective, sprayed the glass cage with fake oil and then the walls with fake blood using plastic Coca-Cola bottles.

They then unveiled a large banner calling for “Climate Justice”, denouncing a “COPCA COLA” in reference to COP27 which is taking place in Sharm el-Sheikh, Egypt, and to the Coca-Cola company, one of the official sponsors of the conference.

“Futuro Vegetal”, a Spanish collective for disobedience against the climate crisis, is one of the conservation organisations that are not hiding their frustration at the end of the first week of the UN climate summit, hosted this year by Egypt.

The launch of COP27 on 6 November 2022 was the first time that the topic of ‘loss and damage’ due to climate change has been officially put on the agenda of a COP.

In the wake of this, leaders of non-governmental organisations (NGOs) also launched an appeal on Tuesday 8 November 2022 to support developing countries. On the plant, six out of seven people on the planet live in developing countries. Environmentalists are insisting that COP27 establish a funding mechanism to deal with loss and damage. But so far, only five European countries – Austria, Scotland, Belgium, Denmark and Germany – have committed to addressing loss and damage.

On climate finance, rich countries failed to deliver on their promise to provide $100 billion a year for developing countries by 2020. But the first week of COP27 did not see much progress in this regard. Developed countries, on the other hand, say they can reach $100 billion by 2023.

“The negotiations are moving slowly. At the same time, announcements are being made on the sidelines of the COP, such as that of US climate envoy John Kerry on a carbon credit market, without enough information to assess them,” said Myrto Tilianaki, climate advocacy officer at CCFD-Terre solidaire in France.

Speaking at the opening of the meeting on 7 November 2022, French President Emmanuel Macron put pressure on the United States of America and China to meet the commitments made by these two countries, the two biggest greenhouse gas (GHG) emitters, in terms of financial solidarity and carbon dioxide emissions reduction.