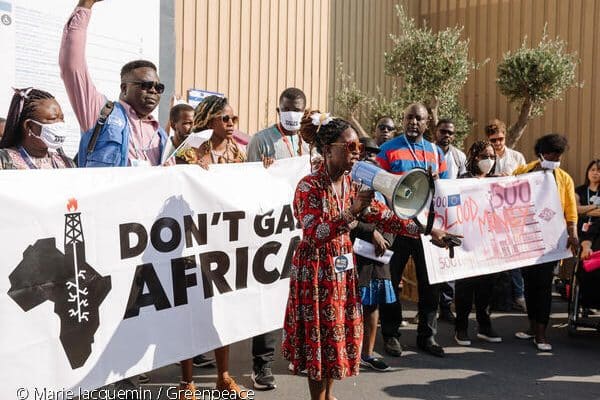 Climate activists from sub-Saharan Africa gathered in Sharm el-Sheikh on 16 November 2022 to respond to the fossil fuel rush by African leaders at the 27th UN Climate Conference (COP27).

International, pan-African and national civil society organisations and activists are dismayed by the threat of strangling communities and economies with increased oil and gas production for decades to come. Ahead of the official closing of the climate talks in Sharm el-Sheikh, African activists spoke at a press conference on 16 November 2022, to express their dismay at the continued production of fossil fuels on the continent.

For the conservation organisations Safe Lamu, Stop EACOP, Fridays for future, Powershift Africa, the Youth Movement for the Protection of the Environment in the Democratic Republic of Congo (DRC) and Greenpeace Africa, some African leaders have used the 27th UN Climate Conference (COP27), dubbed the ‘African COP’, to undermine the goals of the Paris Climate Agreement by pushing for new fossil fuel deals to the detriment of people and the continent. Beyond expressing collective demands for an agreement on a dedicated loss and damage financing mechanism and for richer nations to meet their climate commitments on adaptation and mitigation, African delegations used the conference to rally behind the continent’s new oil and gas rush.

The EACOP project in East Africa

“EACOP, the Franco-Chinese crude oil pipeline project in East Africa, is a clear example of colonial exploitation in Africa and in all countries of the South. At 1,444 km from Uganda to Tanzania, it would become the longest heated pipeline in the world, releasing 34 million metric tons of CO2 per year, substantially accelerating climate disruption,” says Patience Nabukalu, a Ugandan activist with Stop EACOP and Fridays for Future.

The project to build a coal-fired power plant in Lamu, on the northern coast of Kenya, is also among the projects decried by these African activists present at COP27.

Read also-COP27: Environmental activists’ frustration at the end of the first week

These projects run counter to the recommendations of the Intergovernmental Panel on Climate Change (IPCC), which says that existing fossil fuel infrastructure is already sufficient to exceed the 1.5°C limit, and the International Energy Agency (IEA), which says that no new oil and gas fields that have been approved for development are compatible with the 1.5°C trajectory.

To achieve a meaningful outcome in Egypt, “delegates must listen to the people of Africa, not the fossil fuel industry, and collectively commit to phasing out all fossil fuels, reflect this commitment in the coverage decision, and agree to the creation of a loss and damage financing mechanism,” advocates say.