CONGO: the government launches work on a hybrid solar power plant in Impfondo 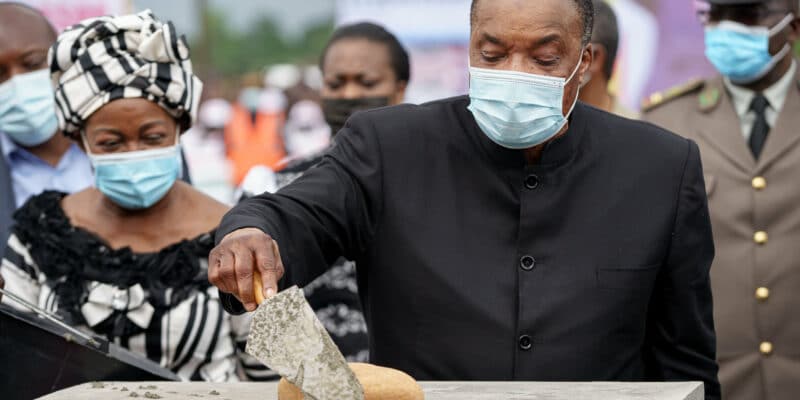 The Congolese government has officially launched construction work on a hybrid solar power plant in Impfondo, in the Likouala department. The project has been entrusted to Produits de construction de Brazzaville (Procob), the subsidiary of the Belgian company ABC Contracting.

President Denis Sassou-Nguesso recently visited Impfondo, in the Likouala department, with a large delegation during his campaign for re-election at the head of the Republic of Congo. It was for the ceremony to lay the foundation stone for the project to build a hybrid solar power plant. The installation, which will have a capacity of 3.4 MW, will be built by Produits de construction de Brazzaville (Procob).

The subsidiary of the Belgian company ABC Contracting will implement this project in several phases. The solar part of the installation will cover a fenced area of 11 hectares. Procob will install 11,520 solar panels with a capacity of 6,480 kVa. The installation of the solar power plant will take 10 months. The cost of this installation has not been revealed, but Procob estimates that the thermal part of the project will require an investment of 2.9 billion CFA francs (4.42 million euros).

An alternative to generators

Procob will also ensure the construction of a 20 kV evacuation line, as well as the extension of the electricity distribution grid by at least 7.5 km. The Brazzaville-based company will rehabilitate and extend the existing low-voltage grid in the town of Impfondo. The 3.4 MW hybrid solar power plant will be delivered before the end of December 2021. The entire project is being financed by the Congolese public treasury.

The project will secure access to electricity in the town of Impfondo. Households and businesses in the main town of Likouala are supplied with electricity by generators belonging to the National Electricity Company (SNE). However, for several years now, the company has been struggling to supply its generators with fuel. As a result, its subscribers have had to suffer load shedding. Impfondo’s situation is symptomatic of the situation in other Congolese localities.

The country has an installed capacity of 650 MW. According to the World Bank’s 2018 report, the rate of access to electricity in Congo is 68.5%. While the situation has improved in recent years in large cities such as Brazzaville and Pointe-Noire, rural areas are still lagging behind, with an access rate to electricity of only 5%.