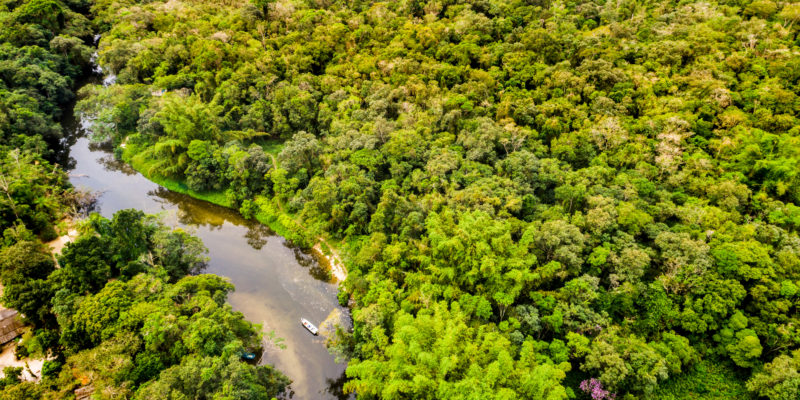 The Summit of Heads of State and Government of the Climate and Blue Fund Commission for the Congo Basin held in Brazzaville from the 27th to the29th of April 2018. The many heads of state present competed for commitments to sustainable management of the forest and the entire territory.

It was the International Conference Centre in Kintélé, located on the northern outskirts of Brazzaville, that hosted the very first summit devoted to the Congo Basin. According to the Congolese Minister of Environment and Tourism, Arlette Soudan-Nonault, the objective of this summit was to review the activities of the Congo Basin Climate Commission and the blue background of this basin. It has also enabled participating States to acquire the necessary tools to accelerate their operational capacity in line with States’ expectations. Concrete action was needed, according to the vision of the Marrakech Declaration, signed in 2016 at the African Summit of Action (held on the sidelines of COP 22, editor’s note).

The “green” resolutions of the summit

With one voice, the participants committed themselves to “work” for the structural transformation of the economies of the Congo Basin Climate Commission area in order to ensure inclusive and sustainable development. They clearly explained this will in the first point of the 7 promises contained in the final declaration. They will work “to eradicate poverty and improve people’s well-being by activating all the human, financial, technical and technological levers as well as the opportunities offered by the green economy and the blue economy”. The leaders also took the decision to “initiate and encourage” the climate investment plans of the commission’s states as well as projects and programmes of the same nature. This will enable them to combat the adverse effects of climate change while promoting inclusive and sustainable economic development.

Why a summit on the Congo Basin?

The peat bog in the Congo Basin is the largest in the tropics, accounting for 30 billion tons of CO2, or 30% of the carbon dioxide in tropical peat lands. According to the Congolese online newspaper Adiac-congo, this carbon stock corresponds to “three years of global emissions linked to fossil energies, i.e. as much as all the carbon stored above ground in the 228 million hectares of forests in the Congo Basin”. With this area, the Congo Basin forests are the second largest tropical forest massif in the world, after the Amazon. These forests are crucial for climate stability since they constitute an exceptional carbon sink on a global scale, not to mention the local benefits to limit the consequences of global warming. It was therefore necessary to create a commission to promote ecosystem-based management of the forest massif anh its missions”. In this light, they quickly turned to the international community (agencies of the United Nations system and philanthropic foundations), donors and private investors so that the latter could accompany them in the constitution of the said budget and support the Final Declaration. Complaints that may have echoes. The President of the African Union (AU) Commission, Moussa Faki Mahamat, present at the summit, announced the creation in the coming days of a Special Council to address environmental issues within his institution; d the waters of this Basin; policy implemented with the committed support of the Moroccan King, Mohammed VI, who also took part in the work of the summit.

The role of the Blue Fund

The Blue Fund for the Congo Basin is an international development fund whose objective is to enable the States of the Congo Basin sub region to move from an economy based on the exploitation of forests to one based on water management resources, for rivers in this case. It will finance projects concerning the maintenance of waterways, forest preservation and improvement of the environment. The agreement establishing this fund was signed on March 9 2017 in Oyo, Republic of Congo, by 12 States (Cameroon, Gabon, Zambia, Chad, Rwanda, Burundi, Angola…).

SENEGAL: An initiative to green Touba, Diourbel and other religious cities

TUNISIA: a call for sustainable mobility projects by bicycle in Kairouan and Mahdia