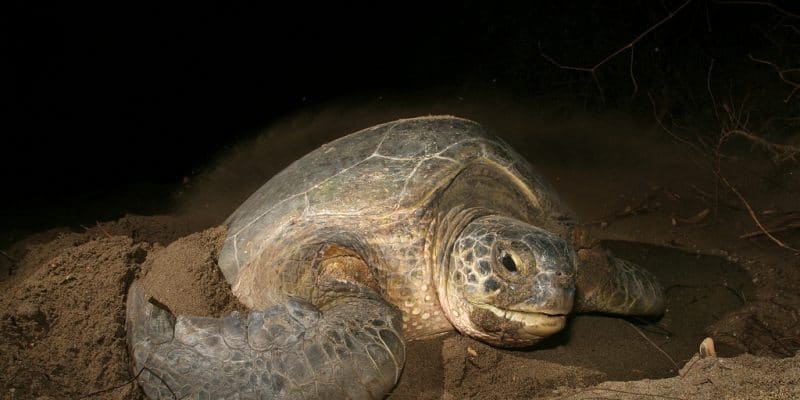 Night-time poaching on Boa Vista, an island in the Cape Verde archipelago, is threatening the survival of sea turtles. In order to reduce turtle poaching, the German Turtle Foundation is launching the "man trading" project on Boa Vista.

“Chip” and “Chloe” are two 2-year-old Labradors. They are brother and sister and were trained in Switzerland. The two sniffer dogs will work in the “man trading” project which aims to fight against sea turtle poaching in Boa Vista, an island in the Cape Verde archipelago. The project was recently launched by the Turtle Foundation, a German organisation specialising in the protection of sea turtles and their habitats. In view of their mission, the Labradors “Chip” and “Chloe” have been renamed “caretta” and “chelo”. The two sniffer dogs are tasked with spotting poachers who attempt to hunt sea turtles. The species most affected by the phenomenon are: the loggerhead turtle or caretta caretta and the green turtle Chelonia mydas.

On the island of Boa Vista, it is mainly the loggerhead turtle or caretta caretta that comes to lay its eggs. Between 2,000 and 5,000 females come to lay eggs on the beach each year. Egg laying always takes place at night. It lasts between 30 and 45 minutes. During this time, the loggerhead turtle or caretta caretta goes into a trance. It is at this precise moment that the poachers intervene. They slice open the ventral part of their shell to extract their flesh. The carcasses are then abandoned on the spot. Poachers operate throughout the nesting period (between June and September).

Until about ten years ago, a few sea turtles of reproductive age were slaughtered at each nesting period in a sordid manner. Poaching of turtles has dropped from over a thousand to less than 100 per year. By 2016, poaching has been on the rise again. In 2017, sea turtle poachers on Boa Vista Island killed 235 turtles. This explains the urgency of finding an effective response.

How will the Labradors be deployed in the field?

The “caretta” and “chelo” Labradors will have two main missions. The first one will consist in tracking down poachers using the tools that they will have forgotten on the beach of Boa Vista after their forfeit. Any object found on the beach will have to be systematically sniffed by the dogs. The Labradors will also have to detect pieces of turtle flesh that the poachers hide in the sand.

To enable them to play their role fully, “caretta” and “chelo” have undergone intensive training on Boa Vista beach and Boa Esperança beach. The training was conducted by the Turtle Foundation team. “During the field trips, the Labradors are accompanied by two trainers from the foundation,” explained a Turtle Foundation official.

While waiting for the nesting period, which begins in June, the “caretta” and “chelo” Labradors continue their training. The Turtle Foundation has also invested in the purchase of drones to spot poachers and detect traps designed for sea turtles.