Homepage » CAMEROON: Youth get together for climate change

CAMEROON: Youth get together for climate change 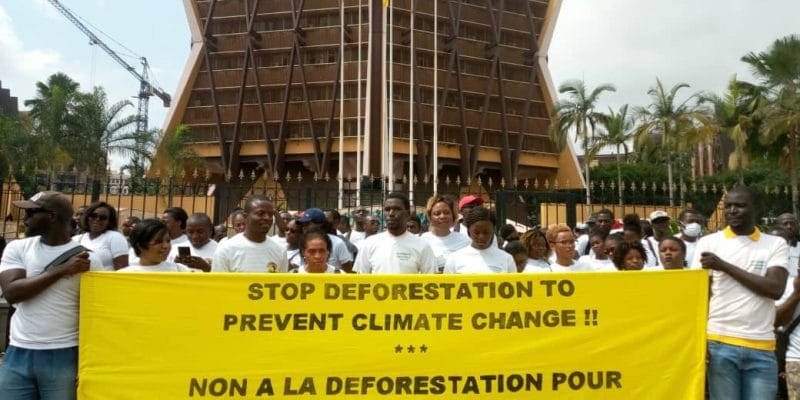 Some members of civil society and volunteers marched on November 29, 2019 in Yaoundé to show their solidarity for the Congo Basin Forest. The march resulted in a series of recommendations submitted to the Prime Minister that should be taken into consideration by the Cameroonian government in the fight against climate change.

Nearly a hundred of them gathered at the Bois Sainte Anastasie, a park in the city of Yaoundé, the capital of Cameroon. The place was the starting point for the climate-related march that took place on November 29, 2019, with young leaders and members of civil society, as well as volunteers from Cameroon and other countries in the Congo Basin. The young people brandished messages on banners and other communication media calling for a strong mobilisation in favour of the climate.

It is an initiative of a group of Cameroonian associations committed to environmental protection, and led by Blessed Action for Africa. As Alphonse Otsamzok, head of this association, pointed out, this campaign for the climate follows on from the one initiated by the young Swedish woman Greta Thunberg. “We resolved to organise it for the first time in Cameroon and the Congo Basin in order to make our voices heard at COP25,” he said.

The march ended in front of the Prime Minister’s office, to whom the young people handed over a series of resolutions, which should be among the proposals of the Cameroonian delegation to COP25, which will be held in Spain from December 2 to 13, 2019. The young people submitted a series of 13 complaints to the authorities. Most of them concern the development of sustainable cities, the fight against deforestation, the involvement of civil society actors in the development of public policies for environmental protection, the development of green markets, the circular economy, etc.

For example, participants urged the government “to make and honour the commitment to replenish the Green Climate Fund created in 2010 under the United Nations Framework Convention on Climate Change”. With regard to energy, they call on the government to “restructure energy production and consumption so that fossil raw materials are increasingly directed towards non-energy uses and gradually replaced by renewable energy sources”. Solutions that would enable Cameroon to comply with the international agreements to which it has subscribed, in particular the Paris Agreements and the Marrakech Pact.