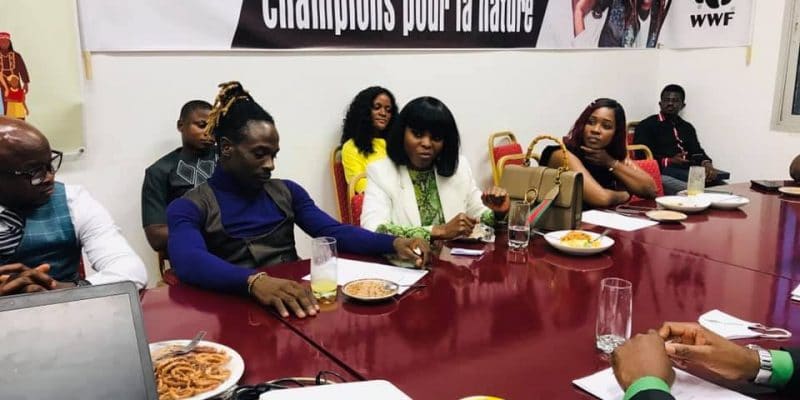 Cameroon's urban music stars are joining the cause defended by the World Wildlife Fund (WWF). The celebrities will accompany with their energy, the campaign of the international NGO on the preservation of Cameroon's rich biodiversity, ranked 5th in Africa.

Is Cameroonian urban music going green? Four big names in the industry have agreed to lend their popularity, vibes and voices to the fight to protect biodiversity. Daphne, Mr. Léo, Salatiel, Wax Dey and the film actress Laura Onyama, signed an agreement with the World Wildlife Fund (WWF) on August 11, 2020 in Yaounde the capital. “We expect these very talented artists to rally young people to inspire decision-makers to take ambitions and concrete actions to ensure a world of positive nature,” said Gilles Etoga, Acting Director of Conservation for WWF-Cameroon.

The commitment of these artists is part of the WWF campaign entitled “New Deal for Nature and People: Reversing the loss of biodiversity by 2030”. Before embarking on the campaign, these artists, whom the World Wildlife Fund (WWF) has dubbed “Champions of the New Deal for Nature and People”, will first be trained on the role and extent of Cameroon’s biodiversity. They will then make raids in some of the country’s protected areas to get a first-hand look at the realities on the ground. “WWF has given me the opportunity to make my voice heard for wildlife. It’s a field I’m very passionate about,” enthused singer Daphne.

The involvement of Cameroonian showbiz celebrities in the protection of biodiversity comes at a time when the world’s fauna and flora is in unprecedented decline. Human activities, including agriculture, logging and infrastructure development, are disrupting the climate and destroying nature at a much faster rate than they can replenish it. According to the World Wildlife Fund (WWF), the world has lost 60% of its biodiversity in just 40 years. Some 1,000,000 species are threatened with extinction over the next decade, and humanity’s footprint is far greater than the planet can sustain.

A context in which Cameroon’s biodiversity appears necessary for the conservation of wild species. The Central African country, which we like to call “Africa in miniature”, is home to more than 90% of the continent’s existing ecological systems. This country is ranked 5th in Africa in terms of fauna diversity, and 4th in terms of flora. Cameroon has 409 species of mammals, 183 species of reptiles, 849 species of birds, 190 species of amphibians, and more than 9000 species of plants.