Homepage » CAMEROON: SC2R collects 500 kg of plastic waste on the banks of the Wouri River

CAMEROON: SC2R collects 500 kg of plastic waste on the banks of the Wouri River 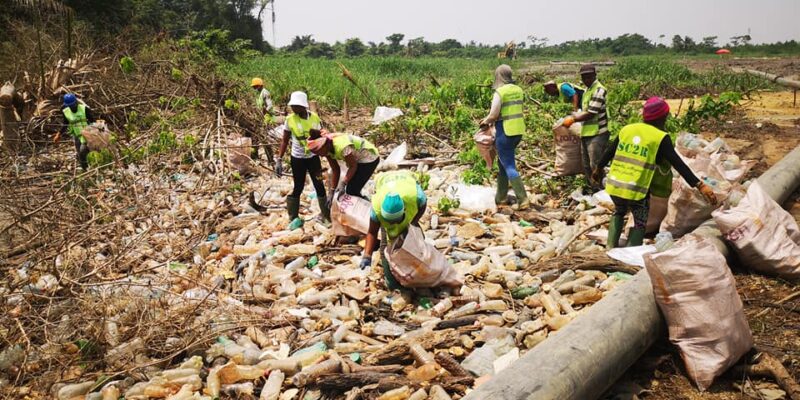 The Société de collecte et de récupération pour le recyclage (SC2R) has just collected 500 kilograms (kg) of plastic waste on one of the banks of the Wouri River in the far south of Cameroon. The initiative is part of both a CSR approach and the "costale world clean-up day", a worldwide movement dedicated to cleaning up the coasts.

Around fifty Eco protectors and collection agents from the Société de collecte et de récupération pour le recyclage (SC2R) invested on February 6th, this year on one of the banks of the Wouri River in Douala, Cameroon. They cleaned up the area by collecting more than 500 kg of plastic waste of all kinds, sent back by the floods. “The activity is part of our CSR (Corporate Social Responsibility) activities and the Costal world clean-up day. In fact, all waste discharged into nature tends to return to the lowest point (the sea). This is due to the effect of wind, rain or gravity. And the sea in turn gives us back everything it receives” explains Falonne Zeudeu, an expert in environment and sustainable development.

The “Costal World Clean-up Day” is a worldwide movement that brings together more than six million volunteers every year to clean up the coasts. But the choice of a bank of the Wouri River by SC2R is explained by the degree of pollution of the river whose estuary is located in the economic capital of Cameroon. On June 7 2019, the banks of this river were cleared of more than 1,600 kg of plastic waste. The operation was conducted that day by the Société Anonyme des Brasseries du Cameroun (SABC) and Nestlé Cameroon, with the technical support of Namé Ricycling.

Cameroon produces more than 600,000 tonnes of plastic waste every year.

According to the latest figures from the Cameroonian Ministry of Environment, Nature Protection and Sustainable Development, more than 600,000 tonnes of plastic waste are produced each year in the Central African country. Globally, the worst is to be feared. According to the World Wildlife Fund (WWF) report entitled “Plastic Pollution: Whose fault is it? ”published in March 2019, if nothing is done, the global production of plastic waste could increase by 41% by 2030 and the amount accumulated in the oceans could double by 2030 to 300 million tonnes. It is therefore to prevent this situation that initiatives such as the “costal world clean-up day” are being relayed around the world.

The collection of plastic waste that SC2R has just carried out on one of the banks of the Wouri River will not stop there. The company intends to roll out to other cities in Cameroon. The plastic waste collected here is processed and transformed into secondary raw material. This is used to manufacture new products.