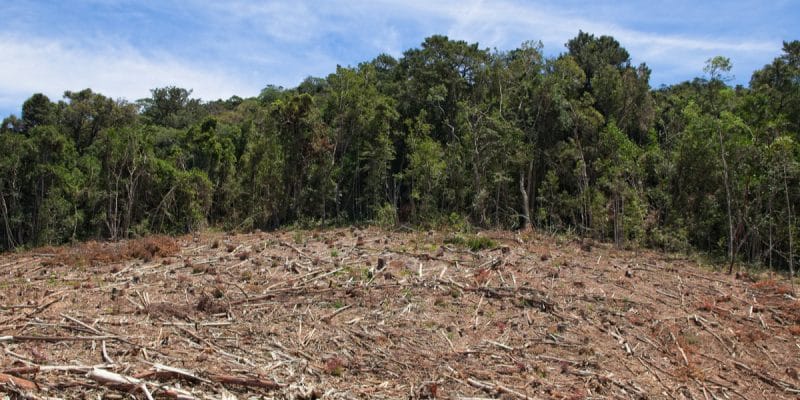 Greenpeace has just called for an immediate halt to the activities of Camvert, the project for the largest palm grove in Central Africa, located in southern Cameroon. In a report published on September 28th, 2020, the environmental NGO says that several legal provisions were flouted during the design and implementation phases of this project planned on 60,000 hectares of forest.

In Cameroon, the Cameroon Green SA (Camvert) project has not finished making headlines. The project to develop the largest palm grove in Central Africa covering 60,000 hectares, six times the surface area of the Senegalese capital Dakar, was again singled out in a new report published on September 28th, by Greenpeace. The report says that in November 2019, Cameroonian Prime Minister Joseph Dion Ngute removed the Camvert area from the permanent forest estate. Following this downgrading, the Minister of State Property and Land Tenure, Henri Eyebe Ayissi, approved on April 6th, 2020, the clearing of an initial 2,500 hectares (ha) of the 60,000 hectares of forest that Camvert is seeking to convert into plantations.

For Greenpeace, this is an emblematic case of projects riddled with illegality and abuse of indigenous rights that exacerbate the climate crisis. The international environmental NGO finds not only a violation of the rights of indigenous peoples, but also a failure to respect the two legal preconditions for the downgrading of state forests in Cameroon. In its article 28-line 2, the forest regime in Cameroon specifies that the total or partial downgrading of a state-owned forest can only take place after the classification of a forest of the same category and of an equivalent surface area in the same ecological zone.

Camvert has already begun the process of clearing the forest.

The Greenpeace report comes two weeks after the launch of Camvert’s activities. The agro-industrial company began planting the first oil palm seedlings on September 12th, 2020. The operation will last one month, for a total of about 236 thousand seedlings, spread over 2600 hectares. By proceeding with this first stage, Camvert’s managers believed they had definitively turned the page on opposition to their project, in view of the environmental and social guarantees they have announced.

These include the creation of jobs and income-generating activities (8,000 direct jobs and 15,000 indirect jobs); the reduction of the structural deficit in fatty products (180 thousand tonnes of palm oil and 18 thousand tonnes of palm oil per year); support for the setting up of 5000 ha of individual, collective and communal plantations, the construction of renewable energy plants, a waste water treatment plant to produce biological fertilisers and methane. “The short-term implementation of mitigation and improvement measures is estimated for the aspects we were able to evaluate at 209,750,000 CFA francs (around 319,761 euros). These costs do not take into account the activities planned in the project’s investment budget,” the company says.

These are obviously commendable guarantees, but they remain in the eyes of Greenpeace as the myth of sustainable forest conversion. In its denunciation, the NGO’s report is similar to the one published in August 2020 by Green Development Advocates (GDA), entitled “the small illegalities of the process of decommissioning and concession of 60,000 ha of forest to an agro-industry in Campo and Nyété”. In their respective reports, Greenpeace and GDA call for a halt to the project, and for the ministries involved in the project to be investigated “immediately”.

“The Camvert project must be stopped altogether and the authorities responsible for monitoring this type of activity sanctioned. The latter have allowed the implementation of a project that not only violates relevant national and international provisions, but also hinders communities’ access to their needs for food and medicinal non-timber forest products (NTFPs) on their land. By doing so, these authorities are threatening the way of life of the forest communities,” notes Aristide Chacgom, GDA’s coordinator.

The civil society organisation Environment Governance Issue (EGI), based in south-west Cameroon, pointed out that large mammals such as elephants, buffaloes and great apes live on the 60,000 hectares of land that the Camvert project intends to annex. An area that also hosts a rich flora and rare semi-aquatic species.