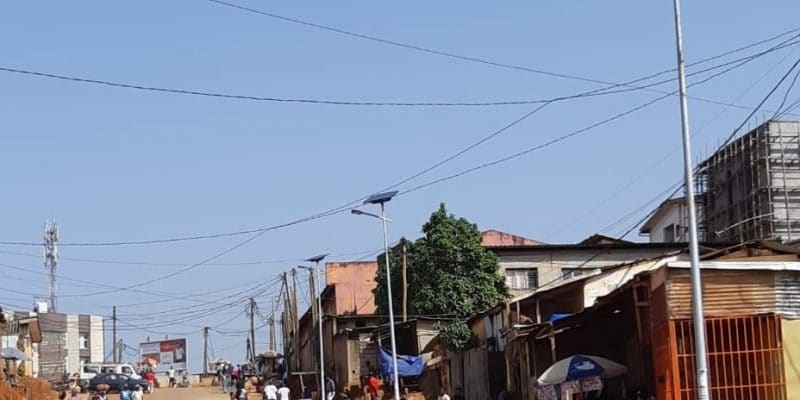 The French company Fonroche Éclairage, a subsidiary of the Fonroche group and specialised in public lighting and renewable energy production, has recently equipped the roads of a neighbourhood in Yaoundé with solar lampposts.

Etam Bafia finally has street light. Lamp standards have just been installed in this underprivileged quarter of Yaoundé, the capital of Cameroon. Totally autonomous, these installations are powered by solar energy. The French company Fonroche Eclairage, a subsidiary of the Fonroche group and specialised in public lighting and renewable energy production, has been chosen by the authorities to supply and install these solar street lamps that will change the lives of the inhabitants of Etam Bafia.

The solar light poles put into service are 7 m high. Each street lamp is equipped with a solar panel and a battery for electricity storage. “The sun’s energy during the day is captured via the photovoltaic panel and then stored in the battery. At nightfall, the battery releases the energy to power the LED lantern. An intelligent management system ensures that it is programmed to guarantee 365 nights of lighting per year,” says Fonroche Eclairage.

With this new project, the company, which employs more than 200 people, is strengthening its position on the African continent. In 2018 in Senegal, it won a contract worth 57 billion CFA francs (nearly 87 million euros) to supply 50,000 solar streetlights. The project was presented by the Senegalese authorities as one of the most important in terms of public lighting in Africa. They also considered that this public lighting equipment should cover one third of Senegal’s territory after three years of work.

In Cameroon, Fonroche Eclairage’s solar street lamps should mainly help the State in its strategy to reduce public lighting costs. In a note published in March 2019, the Cameroonian Minister of Water and Energy reported that public lighting consumes 2 billion CFA francs (3 million euros) every month. It is in this context that the municipality of Djoum in south Cameroon recently introduced solar street lamps that make it easier for people to move around after sunset in this region marked by frequent power outages.