Homepage » CAMEROON: FGEF finances the protection of chimpanzees in Deng-Deng 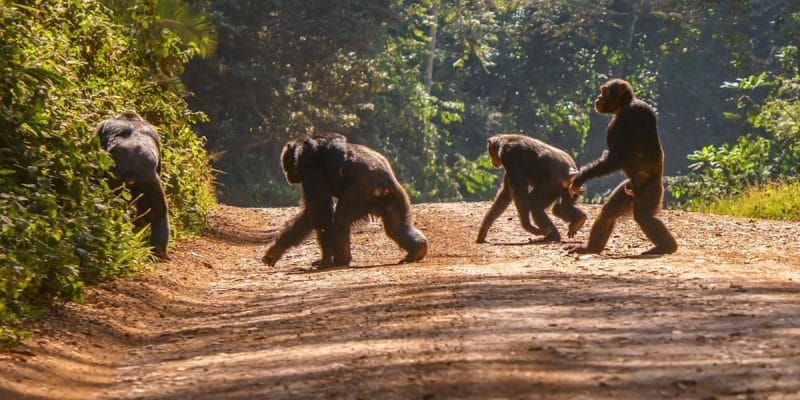 The French government has just granted financial support to Cameroon in the order of 990,000 euros. This funding is for the protection of chimpanzee and gorilla populations in the Den-Deng reserve in eastern Cameroon. The rich biodiversity of this park has been profoundly affected by the construction of structures and poaching.

The sky is clearing over the existence of biodiversity in the Deng-Deng National Park (PNDD) located in the Eastern region of Cameroon. On October 30th, 2020 in Yaoundé, Agence Française de Développement (AFD) on behalf of the French Global Environment Facility (FGEF) signed a financing agreement with Electricity Development Corporation (EDC) for 650 million CFA francs (990 000 euros) for the project to support the implementation of the PNDD.

Created in 2010 on an area of 68,200 hectares, the Deng-Deng nature reserve does not yet have a buffer zone, yet its rich biodiversity, particularly its gorillas and chimpanzees, is facing a double threat. On the one hand, the construction of an oil pipeline crossing Cameroon to Chad, and the Lom Pangar hydroelectric dam are threatening wildlife habitat. And on the other hand, there is the strong poaching pressure in the East Cameroon region. In order to establish the park’s vocation, which is that of species preservation, the funds allocated by the FFEM will be used to set up a sustainable governance and management unit for the park. This unit will, among other things, ensure the transparent use of the financial income generated by water fees from the Lom-Pangar dam-reservoir.

The agreement between AFD and EDC follows on from a concession and water fee agreement validated on September 7th, 2020 between EDC and the State of Cameroon. In this agreement the public operator of Cameroon’s dams undertook to allocate part of its remuneration obtained from independent power producers (IPPs) that exploit the waters of the Sanaga River to the management of the Deng-Deng park. For the park is indeed the ecological compensation component of the Lom-Pangar hydroelectric project. “The protection of the NDPD was one of the most important elements to guarantee the support of donors such as the World Bank, AFD, the European Investment Bank (EIB), and the African Development Bank (AfDB),” says EDC CEO Théodore Nsangou.

France’s interventions in the Lom-Pangar hydroelectric dam and the project to support the implementation of the NDP are at the crossroads of several Sustainable Development Objectives (SDGs): access to water, the use of renewable energies, the fight against climate change, life on earth and partnerships between actors.