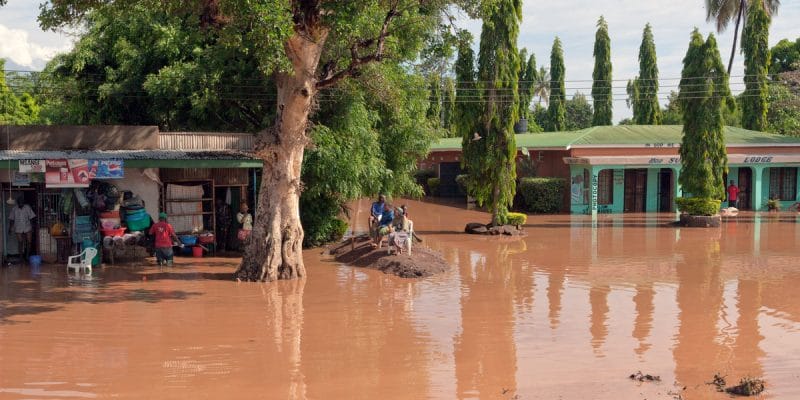 The people of Douala have not yet fully recovered from the impressive floods that took over the economic capital of Cameroon on Friday, August 21, 2020. It is the outcome of intense rains, which had been announced a few weeks earlier by the meteorological services. The estuary cities of Cameroon should indeed expect more disasters of this kind, Africa being the continent that will have to pay the high price of climate change.

In Cameroon, the forecasts of the National Observatory of Climate Change (Onacc) materialised on August 20 and 21, 2020 in the city of Douala through heavy downpours. The heavy rainfall caused the overflow of the Wouri River and other rivers which then spread into the estuary city at a height of more than one meter. “It’s been almost 20 years, we’ve never seen anything like this here. Honestly, we’re overwhelmed, we’re overwhelmed, and the material damage is enormous,” said a distraught resident.

The assessment of this other submersion of the economic capital of Cameroon by the waters has not yet been done by the authorities. And local media report that other Cameroonian cities have also been flooded in recent days. These are Edéa, a town close to Douala in the Littoral region, and Kribi, a seaside town located in the southern region.

The National Observatory of Climate Change had predicted these precipitations in its seasonal climate parameter forecast bulletin, published at the end of June 2020. The experts indicated, among other things, a very high risk of flooding in urban and peri-urban areas during the months of July and August 2020. Reacting to this alert, the government, through the Ministry of Decentralization and Local Development, instructed the 374 district town halls to organize campaigns to fight against insalubrity and to regularly clean runoff drains. A preventive solution that seems not to have been applied, given the scale of the floods.

The effects of climate change

The central African country, Cameroon should prepare for more extreme rainfall events that will not only cause floods but also landslides like the rest of the continent. For global warming, which is the cause of these natural phenomena is not about to stop, and it is Africa that will have to pay a high price according to UN experts.

In its annual report published in 2017, the United Nations Environment Programme (UNEP) estimates that even if the various countries of the planet meet their commitments made in Paris at COP 21, mercury is expected to rise by more than 3 ° C on “horizon 2071-2100”, with its share of extreme weather events announced. These include recurring waves of drought, cyclones, floods and the submersion of certain territories by water as a result of rising oceans.

These extreme climatic phenomena will be geographically unevenly distributed, with Africa being the main focus. In economic terms, the Intergovernmental Panel on Climate Change (IPCC) estimates that climate change could lead to a decline in continental GDP of between 2 and 4% by 2040 and between 10 and 25% by 2100.