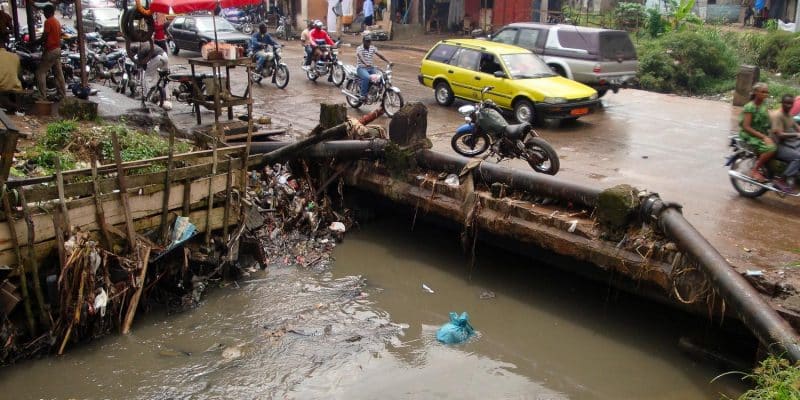 The Cameroonian government has obtained a loan of CFAF 15.8 billion (about US$ 23.7 million) from the African Development Bank (AfDB) for the implementation of the Yaounde City Storm Water Drainage Supplementary Project (PCADY). The financing agreement was signed on 20 September 2022.

The US$ 38.55 million financing approved by the African Development Bank (AfDB) for the Yaounde Complementary Storm Water Sanitation Project (PCADY), will be allocated in several tranches, the first of which will amount to CFAF 15.8 billion, about US$ 23.7 million. The financing agreement was signed on 20 September 2022 by Cameroon’s Economy, Planning and Regional Development Minister, Alamine Ousmane Mey, and the AfDB’s Director General for the Central Africa Region, Serge N’Guessan.

The loan will be used to build a flood control basin and a canal on the Djoungolo River. A scupper will also be built opposite the municipal roadway (on Avenue Charles Atangana, editor’s note) connecting the Mingoa River canal to the Mfoundi River.

The objective is to reduce flooding and improve the fluidity of urban traffic in this city of over 4.3 million inhabitants. As designed by the Cameroonian government, PCADY will require an investment of US$42.84 million. An additional $8 million will be contributed by the Global Environment Facility (GEF).

The PCADY project, which starts in 2023, will also allow for the widening of the roads along the banks of the canal built on the Abiergue River, and the rehabilitation of the Mfoundi street giving access to the eponymous market, which was degraded during the construction of the canal. Sanitation services and household waste management will also be strengthened through the deployment of waste bins. “In its completion phase, the project will provide institutional support and strengthen the capacities of technical ministries, municipalities and other stakeholders in the pre-collection and recovery of waste,” the AfDB said.