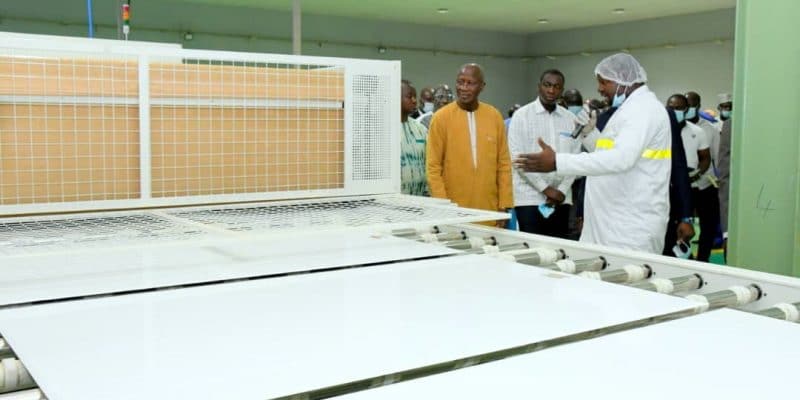 Burkina Faso has just set up a solar panel production unit. Called "Faso Energy", the facility located in the capital Ouagadougou is capable of producing 30 MW of solar panels per year.

A solar panel assembly plant has just been set up in Burkina Faso. Located in the capital Ouagadougou, the facility has a production capacity of 30 MW of solar panels per year, i.e. 200 solar panels manufactured every day. This project is initiated by El hadj Moussa Koanda. This economic operator has invested more than 3 billion CFA francs (nearly 5 million euros).

Named “Faso Energy”, the plant was inaugurated on September 22, 2020 by the Burkinabe Prime Minister Christophe Joseph Marie Dabiré. According to this official, the facility will promote the acquisition of solar energy equipment by the population, thus reducing the need to increase the rate of access to electricity in Burkina Faso. According to the World Bank’s 2018 report, 62.3% of the Burkinabe urban population, but only 14,4 % of total population, has access to electricity in the country.

Towards reducing imports of solar equipment

“We have promoted the admission of “Faso Energy” to the Investment Code. This gave it the right to many facilities, including the non-payment of customs taxes during the establishment of the plant in Burkina Faso, allowing the company to benefit from nearly 1 billion CFA francs (more than 1.5 million euros) in tax exemptions, explains Christophe Joseph Marie Dabiré, the Prime Minister of Burkina Faso. Our goal is to rationalize the importation of solar panels into the country”.

El hadj Moussa Koanda’s initiative should also enable the government of Burkina Faso to move towards its goal of producing 30% of its electricity from solar energy by 2030.