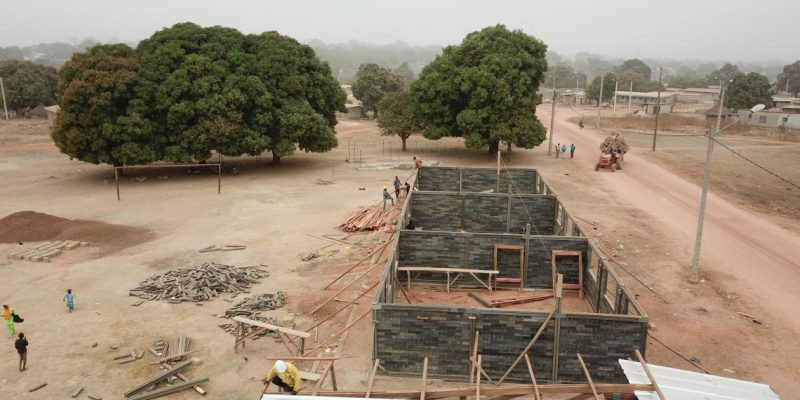 Education and environmental protection will soon go hand in hand in Benin. Three classrooms built with recycled plastic bricks were inaugurated on August 4, 2020 in three schools in Benin. The donation from UNICEF reminded the Beninese authorities of the need to set up a factory to manufacture the bricks from plastic waste. This ecological innovation will not only help to combat plastic pollution, but also reduce the lack of school infrastructure in Benin.

The United Nations Children’s Fund (UNICEF) is reviving the need for Benin to set up a factory to manufacture bricks from plastic waste. “If Benin could acquire the capacity to produce these bricks locally, it would enable it to reduce the deficit in school infrastructure, especially in the most disadvantaged areas, to contribute to poverty reduction by improving revenues of women and young people involved in the recycling of plastic waste and to fight against plastic pollution,” says Claudes Kamenga, UNICEF’s resident representative in Benin. This UN official was speaking on August 4, 2020 on the occasion of the inauguration of three classrooms built with recycled plastic bricks in Ladji primary school in Cotonou, Zoungo primary school in the commune of Ouinhi and Louho primary school in Porto-Novo.

To build these classrooms, UNICEF had to import the raw material from Colombia. Hence its recommendation, the second of its kind, for a Beninese factory producing recycled plastic bricks. First approached on this subject in December 2019, the Beninese government had examined Unicef’s proposal with great interest, and the Council of Ministers had agreed to carry out the project by adapting it to the Beninese context.

According to the United Nations Children’s Fund (UNICEF), recycled plastic bricks are considered a godsend for Benin, because the West African country does not have enough classrooms. In 2018, in the Atacora department in north-west Benin, the secondary education department had a deficit of 424 classrooms.

Côte d’Ivoire is the first African country to experiment with recycled plastic bricks. Launched in July 2019 with the support of UNICEF, this initiative will have enabled several thousand children to gain a place in school for the very first time in their lives.