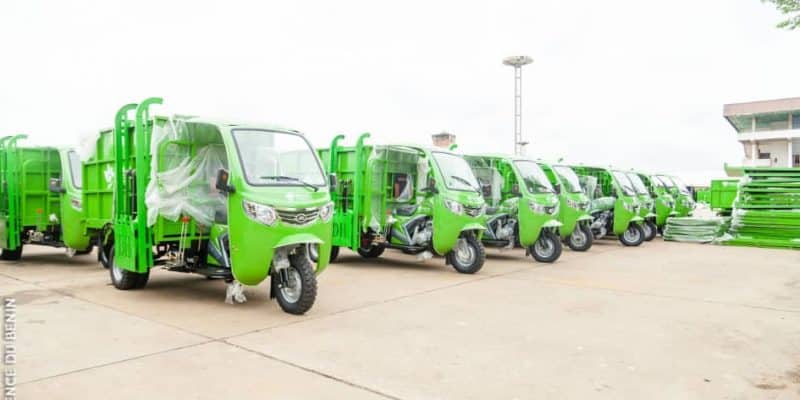 The management of solid and household waste in the Grand Nokoué in Benin is taking a new turn. Société de gestion des déchets et de la salubrité du Grand Nokoué (SGDS-GN) has just equipped 69 small and medium-sized enterprises (SMEs) operating in the waste sector with 550 tricycles to speed up collection work in the field.

“Improving the collection of solid and household waste” in Greater Nokoué”. This is the goal of Société de gestion des déchets et de la salubrité du Grand Nokoué (SGDS-GN). In order to achieve its goal, the public company decided to involve small and medium enterprises (SMEs) operating in waste management. As a result, 69 of them received 550 three-wheeled machines to improve waste collection. They will be used as part of the second phase of the solid and household waste management project in the greater Nokoué area, which will be launched on October 19th, 2020.

Before the field trips, the drivers of the vehicles and their supervisors will undergo a short two-day theoretical and practical training to operate their machines. According to the partnership between SGDS-GN and the supplier of the tricycles, a garage will also be built in each commune of Greater Nokoué for the repair and maintenance of the tricycles for at least 18 months. Benin’s Minister of Living Environment and Sustainable Development, José Didier Tonato, says that Benin has also invested 7 billion CFA francs (nearly 10.1 million euros) for the acquisition of heavy machinery that will be delivered in the coming months.

The system for monitoring and controlling SME performance will be strengthened with the deployment of 61 agents to manage the collection points and 35 supervisors to organise information and awareness sessions in the 69 waste collection areas of Greater Nokoué. As part of this initiative, “some 10,000 direct and indirect jobs in the waste sector will be created to ensure the full implementation of the solid and household waste management project in Greater Nokoué,” says José Didier Tonato, Benin’s Minister for the Living Environment and Sustainable Development. The initiative is part of the Government’s Action Programme (PAG) by Benin’s President Patrice Talon.