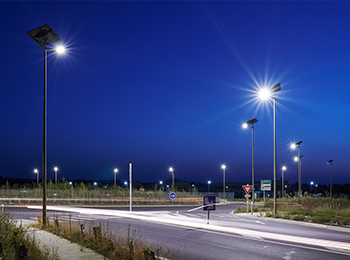 The French company Fonroche Éclairage, a subsidiary of the Fonroche group specialising in street lighting and renewable energy production, has been selected to supply and install solar street lamps in several localities in Benin. The value of this contract is €22 million.

West Africa once again chooses Fonroche Éclairage, the subsidiary of the Fonroche group, which specialises in public lighting and renewable energy production. This time, it is Benin that opens the doors with a lucrative contract worth 22 million euros. The aim is to supply and install 15,000 solar streetlights.

Fonroche was chosen following a call for tenders launched by the Beninese authorities to provide public lighting in several localities in the country. The call for expressions of interest was launched as part of the Paving Project, in the context of President Patrice Talon’s government’s action plan. The Paving Project will also allow the development of green spaces, the purchase of security equipment and urban real estate in several cities in Benin.

A major contract in Senegal

According to Laurent Lubarno, general manager of Fonroche, the solar street lamp installed by his company “will produce the same power as traditional public lighting (15 to 20 lux depending on needs), will operate 365 days a year without interruption and will not require maintenance for ten years”.

The 15,000 streetlights will be equipped with connected sensors. This will allow Fonroche teams, who will also maintain the installations, to be able to monitor the operation of the streetlights remotely. Thus, if one of them does not provide sufficient lighting on a street corner, they are able to adjust it from a control centre.

Fonroche’s new contract strengthens its entry into West African markets. In Senegal, the company won a contract worth 57 billion CFA francs (nearly 87 million euros) to supply 50,000 solar streetlights in several cities across the country. Part of the project has already been inaugurated by the President of the Republic of Senegal Macky Sall. This concerns the lighting of the access roads to Dakar Blaise Diagne International Airport (AIBD).

The company, which employs 200 people, is also present in Central Africa. In April 2019, it delivered the installation of solar street lamps in Etam Bafia, a slum area in Yaoundé, the capital of Cameroon.