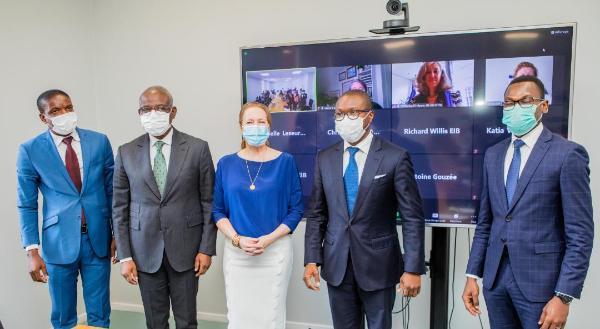 The government of Benin has secured a $140 million loan from the European Investment Bank (EIB) to support the health sector and the development of rainwater drainage systems. Heavy rains in West Africa are classified as an effect of climate change.

On the side-lines of the summit on the recovery of African economies held on May 18th, 2021 in Paris, France, the European Investment Bank (EIB) confirmed a €140 million loan to Benin. This financing, which will contribute to post-Covid-19 recovery, is intended for the health sector and for stormwater drainage. Stormwater drainage is a major challenge for the Beninese government, which is implementing the Secondary Cities Stormwater Sanitation Project (PAPVS).

The EIB is supporting the project with a EUR 110 million loan. The funds will support stormwater drainage in the cities of Sèmè-Podji and Abomey-Calavi. As conceived by the Beninese Ministry of Living Environment and Sustainable Development, the PAPVS, which will require a total investment of €424 million, benefits six other secondary cities, including Porto-Novo, Bohicon, Natitingou, Abomey, Ouidah and Parakou.

The PAPVS covers the extension and rehabilitation of primary and secondary rainwater drainage systems, as well as the rehabilitation of related roads in the cities concerned. These works will significantly reduce flooding and stagnant water, with a positive impact on human and economic development. The PAPVS is expected to contribute to the improvement of the living conditions of the populations and to the mitigation of the effects of climate change. Most of the cities involved, including Abomey Calavi and Sèmè-Podji, are located on the coast or near the sea. The project will also help to reduce the amount of plastic waste reaching the Atlantic Ocean.

According to the EIB, the Secondary Cities Rainwater Sanitation Project will benefit 800,000 people in Abomey Calavi and Sèmè-Podji. The project is also financed by the African Development Bank (AfDB) and the West African Development Bank (BOAD). The Beninese government has included the PAPVS in the framework of the Urban Environmental Management Emergency Project (PUGEMU), which aims to improve infrastructure and mitigate negative environmental impacts resulting from the 2010 floods in the Grand Nokoué region and to increase Benin’s level of preparedness for future floods. These floods are caused by heavy rains, one of the consequences of climate change which also affects Ivory Coast and Senegal.