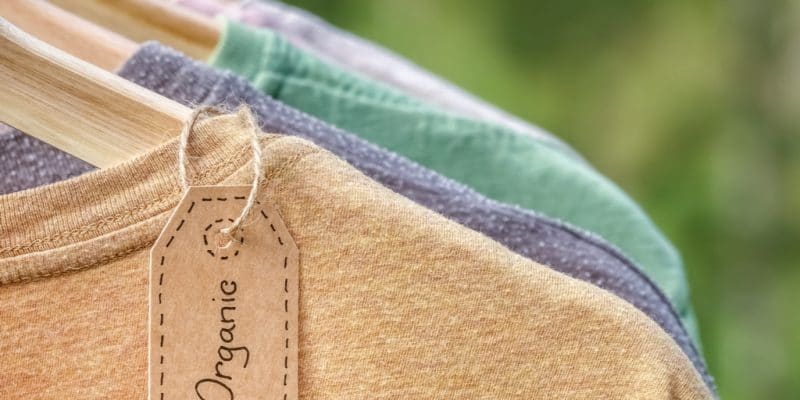 The mobilisation of fashion brands for a sustainable future in Africa is intensifying. Brands such as Louis Vuitton Moet Hennessey (LVMH), L'Oréal and Chanel are now imposing "organic" certification on their sourcing on the continent. The aim is to preserve plant and animal biodiversity.

Global fashion is making eyes at Africa. African models and designers are on every catwalk and magazine cover. But what about the environmental impact of this sector on the continent? Well, it’s a fact: fashion companies are increasingly focusing on projects that help preserve biodiversity. This eco-friendly policy has extended to the supply chain of many fashion companies.

Africa is at the heart of this sustainability agenda, as most fashion companies source their raw materials (cotton, animal skins, etc.) there. Among them is Louis Vuitton Moet Hennessey (LVMH). The world’s leading luxury goods company, which owns brands such as Louis Vuitton, Fendi, Christian Dior and Marc Jacobs, is imposing new criteria on the African crocodile farms that supply its tannery. The conditions, announced on February 20th, 2019 by the group, specify that it is now a matter of guaranteeing the preservation of the species, respect for local communities, animal welfare, working conditions for men and women on the farms and protection of the environment in general. Added to this list is the traceability already in place in the farms (in Kenya, Zambia and Zimbabwe) of 100% of the skins. 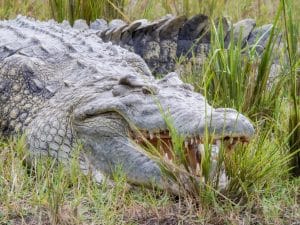 Big crocodile in the Nilo river©wayak/Shutterstock

LVMH’s strategy is in line with a global movement that began with the limitation and exclusion of natural furs, replaced by synthetic furs, which are more environmentally friendly. The group is now going further with its approach to ensure that its crocodile skin supply chain is free of poaching and animal torture.

Brands such as Chanel, Jean-Paul Gaultier, Donatella Versace, Gucci and Lacoste also want to reduce their environmental impact. While most of these companies have banned animal skins (crocodile, lizard, snake, shagreen, etc.) and natural furs from their collections, the Lacoste brand is integrating the defence of biodiversity into its communication strategy. On the occasion of a fashion show, the brand may decide to replace the crocodile in its iconic logo with animal species threatened with extinction in Africa, in particular the northern lepilemur of Madagascar, and in the rest of the world, as was the case in 2018. The aim is to alert consumers to the risk of extinction for thousands of animal species, but also to financially support the Save Our Species programme of the International Union for Conservation of Nature (IUCN).  Lacoste’s initiative earned it the Grand Prix Stratégies du luxe in 2018. An operation orchestrated by the BETC agency, in partnership with the IUCN. 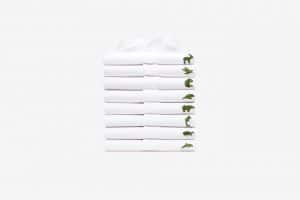 In 2018, Lacoste was awarded the Grand Prix Stratégies du Luxe for “Save our species”©Lacoste

According to the World Wildlife Fund (WWF), the pangolin is also highly prized by fashion brands. The organisation notes that around 1 million pangolins have been caught in Africa and Asia over the past ten years (not counting local consumption). Of these, 195,000 have been trafficked for their scales, which are used in the cosmetics industry for their therapeutic and aphrodisiac properties.

In addition to the disappearance of wildlife, the fashion industry contributes to the degradation of flora, accelerating global warming. In order to reduce their carbon footprint, consumer clothing brands such as H&M and Zara have also gone green by committing themselves to fighting deforestation with the NGO Rainforest Action Network.

The use of renewable raw materials

L’Oréal has not escaped the green wave. To reduce the carbon footprint of its products on the planet by 2030, including in Africa, the world leader in cosmetics favours renewable raw materials. “We want to use only paper, cardboard and wood from sustainably managed forests and preserve biodiversity. We will also replace traditional materials with plastics, recycled glass and bio-based materials,” says L’Oréal.

In 2016, the French industrial group signed the Business and Biodiversity Pact. Through this pact, L’Oréal recognises the importance of the services provided by ecosystems and reaffirms its commitment to the respect and sustainable use of biodiversity, particularly through its supply chain. The group’s policy is based on seven principles, namely guaranteeing the traceability of all raw materials of renewable origin, assessing the environmental and social issues of each of the supply chains, respecting good working conditions and human rights in accordance with the principles laid down by the International Labour Organisation (ILO) throughout the production chain, Equality at work and the promotion of women, respect for the cultivation and harvesting of plants, which must contribute to the economic development of producers and respect traditional knowledge derived from biodiversity, the preservation of biodiversity and forests, and finally the application of sustainable and low-carbon agricultural practices.

“In 2019, 59% of the raw materials used were of renewable origin, i.e. mostly of plant origin. This represents 1,600 ingredients from nearly 350 plant species from around 100 countries, including Africa. And 68% of these renewable ingredients come from certified sustainable sources,” says L’Oréal. 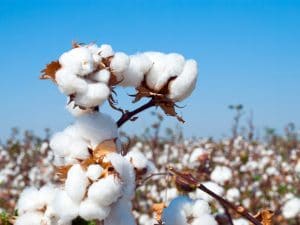 Several labels have been established to judge the organic nature of raw materials, including the Global Organic Textile Standard (GOTS) label. Products bearing this label must contain a minimum of 95% certified organic fibres compared to 70% for conventional cotton. The NATURTEXTIL IVN ZERTIFIZIERT BEST quality label raises the standard of the GOTS label. No exception is made for copper colours containing heavy metals. Developed by the International Association for Natural Textiles IVN, this label also prohibits the use of mercerisation, which gives cotton a permanent shine and is obtained with caustic soda, as well as optical brighteners. The “Max Havelaar” label guarantees that the agricultural products come from fair trade.

Although Africa remains a small producer of organic cotton with a reduced share of 4.05% of global production between 2017 and 2018, the continent nevertheless has significant potential. “Africa is at a crossroads,” said La Rhea Pepper, Executive Director of the NGO Textile Exchange in 2020. “It is essential that governments, farmers and other stakeholders recognise the importance of protecting the right of farmers to grow non-GM crops. Organic farming is a proven system for sequestering carbon, enhancing soil health and biodiversity, and increasing food security. The introduction of GM agriculture requires the implementation of strict biosafety regulations as well as investment in non-GM seeds and training to ensure co-existence with organic farming.”

According to the European Union (EU), the area of land under organic farming is increasing by about 400,000 hectares per year. The EU wants to impose this “organic” certification on all companies in various sectors, including the fashion industry in all countries. “Organic farmers in third countries who export their organic products to the EU market will also be subject to the same single set of rules, which will replace the 60 or more different standards considered equivalent that apply to imported organic products,” says the EU Commission in its directives.

The environmental facts are clear. The fashion industry alone is responsible for 8% to 10% of global carbon dioxide emissions, which is more than international flights and shipping combined, according to data from the United Nations Environment Programme (UNEP). These emissions are mainly related to the production of raw materials, the manufacture of textiles and the transport of finished products.

The water footprint is equally catastrophic. The United Nations Conference on Trade and Development (UNCTAD) estimates in a report that about 93 billion cubic metres of water – enough to meet the needs of five million people – are used each year by this industry. It takes 7,500 litres of water to make a single pair of jeans – the equivalent of the water drunk by a human being for seven years. The biggest environmental impact of fashion is related to the washing of clothes, because of the water and electricity used, but also because of the water and soil pollution it causes. According to UNCTAD, 500,000 tonnes of plastic microfibres, the equivalent of 3 million barrels of oil, are dumped into the oceans each year.

When you put the restrictions imposed by the big brands and the UN figures side by side, you realise that there is still a lot to be done to mitigate the damage caused by the fashion industry on biodiversity. In Africa, too, young entrepreneurs have realised the need to do their bit for their nature reserves.

To clean up the streets of Lagos, Nigeria’s largest city with over 14.8 million inhabitants and the second largest city on the African continent after Kinshasa in the Democratic Republic of Congo (DRC), the brand Nkow, founded by Nkwo Onwuka, recycles second-hand clothes imported from abroad.  The brand is inspired by African artisanal weaving techniques, as well as a refusal to use the modern production methods of the fashion industry. 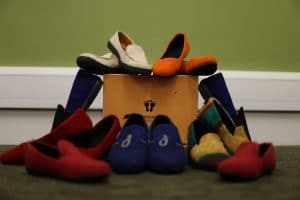 Shoes made from pineapple waste©Pine Kazi

Like Nkow, Pine Kazi recycles waste to produce fashion accessories. The young Kenyan company makes eco-friendly shoes from pineapple waste. In March 2021, it won the Fashionomics Africa competition organised by the African Development Bank (AfDB). Through its Fashionomics Africa competition, the pan-African financial institution aims to increase Africa’s participation in the value chains of the global textile and fashion industry, with a focus on women’s entrepreneurship.

Numerous projects are being developed in Africa for more sustainable fashion, notably by brands such as Akibe, which specialises in the manufacture of solid, zero waste cosmetics in Port-Gentil, Gabon; CiiE Luxuries, which provides Nigerians with accessories made from textile waste and upcycled leather; and the young company Labake Lagos, which also combines fashion and sustainable development.