Homepage » AFRICA: What’s at stake in the global agreement against plastic pollution?

AFRICA: What’s at stake in the global agreement against plastic pollution? 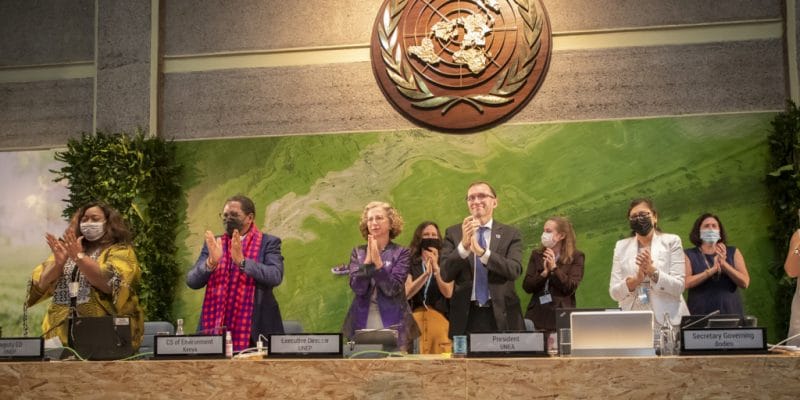 Representatives of 175 countries approve the development of an international agreement to end plastic pollution by 2024. The resolution came at the end of the United Nations Environment Assembly (UNEA), which took place on March 1, 2022 in Nairobi, the capital of Kenya.

The planet triumphs over single-use plastics. At the end of its meetings on March 1, 2022 in the Kenyan capital Nairobi, the United Nations Environment Assembly (UNEA) adopted a resolution establishing an Intergovernmental Negotiating Committee (INC) to draw up an international agreement to combat plastic pollution. The treaty will cover the entire life cycle of plastics, including their production, use and disposal, and will come into force by 2024.

Over the next two years, the INC will also consider the design of reusable and recyclable materials, and the need for enhanced international collaboration to facilitate access to technology, capacity building and scientific and technical cooperation. This will include tackling the entire plastic supply chain in order to achieve a robust text on marine and land-based pollution.

According to the French-based trade association Plastics Europe, a new approach to pollution and waste treatment will solve the global problem of plastic pollution if governments adopt measures adapted to their local contexts at a time when the planet is increasingly vulnerable.

According to the British magazine, the New Scientist, the world produced 381 million tons of plastic in 2015, much of which comes from developing countries and ends up in the oceans because of the lack of means for recycling. According to the same source, plastic production has exploded from 2 million tons in 1950 to 460 million tons in 2019, of which less than 10% is currently recycled and 22% is abandoned in unauthorized landfills, burned in the open or released into the environment.

Today, the production and use of plastic has considerable impacts on the triple global crisis, climate change, biodiversity collapse and pollution that threaten the world. Health experts are even talking about damage to human health in that plastic potentially affects fertility, hormonal, metabolic and neurological activity. In addition, open burning of plastics contributes to air pollution. In this context, greenhouse gas emissions associated with the production, use and disposal of plastics will account for 15% of allowable emissions by 2050, as part of the goal to limit global warming to 1.5° Celsius.

According to Espen Barth Eide, President of the 5th UNEA and Norwegian Minister of Climate and Environment, this resolution adopted by 175 countries is based on about 15 topics under consideration, including the promotion of sustainable production and consumption of plastics and the promotion of eco-design of products, ecological waste management and circular economy.

“With some 11 million tons of plastic waste entering the oceans each year, more than 800 marine and coastal species are affected through ingestion, entanglement and other hazards. Thus, moving to a circular economy can reduce the volume of plastic entering the oceans by more than 80 percent by 2040, reduce the production of virgin plastic by 55 percent, save governments $70 billion by 2040, reduce greenhouse gas emissions by 25 percent, and create 700,000 additional jobs, mainly in the Global South,” estimates the Organization for Economic Cooperation and Development (OECD).

Read also-AFRICA: States to vote on a global treaty on plastics

For Inger Andersen, director general of the United Nations Environment Programme (UNEP), this is the most important multilateral environmental agreement since the 2015 Paris Agreement. “It is an insurance policy for this generation and the next, who will be able to live with plastic without being doomed by it. Alongside negotiations on a binding international agreement, UNEP will work with all willing governments and companies along the production chain to move away from single-use plastics, as well as mobilize private finance and remove barriers to investment in research and a new circular economy,” he says.