Homepage » AFRICA: The five countries that stand out in water management
This article is part of the dossier
WORLD WATER DAY 2021 : WATER AND SANITATION IN AFRICA

AFRICA: The five countries that stand out in water management 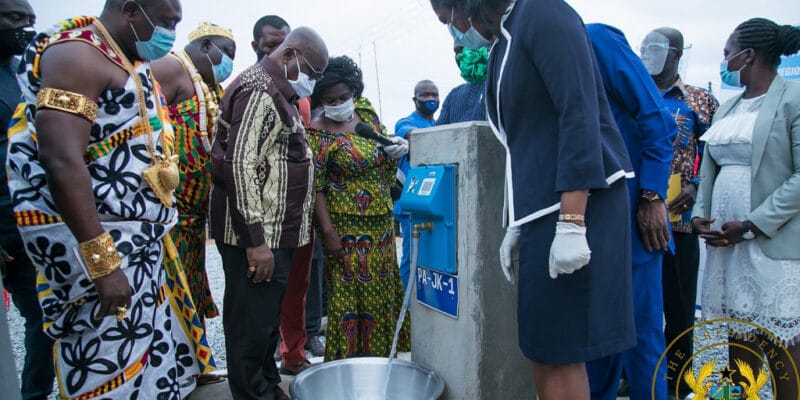 Africa has made significant progress in managing its water resources. But the level of development varies from country to country, depending on the hydrological context and climatic conditions. On the occasion of World Water Day, Afrik 21 has established the "Top 5" of the most advanced countries in terms of water resources management. The criteria include improving the rate of access to drinking water, sustainable development of water infrastructure, preservation of the resource and reuse of treated wastewater.

If there is one African country that stands out in terms of water management, it is Egypt. Despite its desert climate, the country has managed to improve the management of its water resources and has implemented a strict policy of resource conservation. With 96% of the population having access to drinking water, according to the authorities, Egypt is on the way to achieving universal access. This picture is somewhat overshadowed by the situation in rural areas, where the rate of access to drinking water does not exceed 60%.

The country, which is heavily dependent on the Nile to supply its population and for irrigation, quickly became aware of the persistent water stress throughout North Africa. As a result, the government implemented a policy to preserve surface water resources. It now imposes restrictions on the use of water for irrigation, particularly in the Nile Delta. As an alternative to water pumped from the longest river on the African continent (6,895 km), the Egyptian government is proposing the exploitation of non-conventional water resources: the reuse of treated wastewater for irrigation and the desalination of sea water to supply the populations in the coastal governorates.

The development of water supply infrastructures in Egypt

The policy of preserving water resources that has been in place for several years in Egypt has led to unprecedented infrastructural development. Through public-private partnerships (PPPs), the Egyptian government has inaugurated numerous seawater desalination plants and sewage treatment plants in which treated wastewater is reused to restore agricultural land east of the Suez Canal.

Less than a year ago, the Egyptian government inaugurated the Al Mahsamma wastewater treatment plant in the governorate of Ismailia. The plant, which has a capacity of one million m3 per day, discharges its treated water into the irrigation systems of the Sinai Peninsula. Another large treatment plant is under construction in the land of the pharaohs with an expected capacity of 5 million m3 per day. The water from the Bahr Al-Baqar plant will be used to irrigate the 138,600 hectares of plantations east of the Suez Canal.

As for drinking water supply, the Egyptian government, with the help of private companies, is developing desalination projects in the coastal governorates. Thus, by 2022, Cairo plans to equip the whole country with 19 seawater desalination plants. For the next 30 years, the authorities intend to build 67 desalination plants; an ambitious plan which will require a global investment of 435 billion Egyptian pounds (27.4 billion dollars). These reverse osmosis plants will be powered by renewable energy.

Moreover, as part of the Priority Programme for Drinking Water Supply and Irrigation for the period 2019-2026, the Moroccan government will build 20 dams capable of retaining 5.3 billion m3 of water for the supply of the population and for irrigated agriculture. At the same time, the authorities are equipping the country with desalination plants such as the one in Chtouka, currently under construction, which will have a capacity of 270,000 m3 per day, expandable to 450,000 m3.

The development of infrastructures in Ivory Coast

Ivory Coast is undoubtedly among the “Top 5” African countries that have distinguished themselves in recent years in water management. In this West African country, the problem of water stress is not as acute as in North or East Africa. The Ivorian authorities can rely on the country’s many rivers to supply its population. 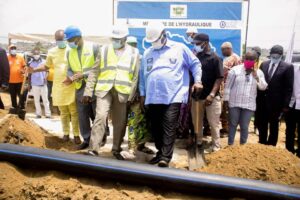 Laurent Tchagba, Ivorian Minister of Hydraulics at the launch of a drinking water project © Government of Côte d’Ivoire

Thanks to the “Water for All” programme currently underway, the country has seen a meteoric rise in the development of its drinking water collection, production and distribution infrastructure. Launched in 2019 with a budget of 1.32 trillion CFA francs (more than 2 million euros), the programme has already enabled the construction of drinking water supply systems in several localities in Ivory Coast. The government also plans to continue installing human-powered pumps in the territories. For urban areas, large drinking water plants are under construction in several cities such as Abidjan to supply several councils. A similar facility is under construction in Bouaké. In Tiassalé, a new plant has been supplying drinking water to the population for several weeks.

Tunisia comes fourth in Afrik 21’s ranking on improving water management in Africa. In recent months, the Tunisian government, through the Société Nationale d’Exploitation et de Distribution des Eaux (Sonede), has been working to extend the drinking water distribution network. The country is also building new drinking water plants to exploit its surface water resources at a time when the whole of North Africa is affected by water stress.

It is to face this phenomenon of climatic origin that Tunisia, like other countries in the sub-region, is investing in the exploitation of non-conventional water resources such as the desalination of sea water, notably on the island of Djerba. Reverse osmosis seawater treatment projects are currently being implemented in the cities of Zarat (50,000 m3 per day), Gabès (25,000 m3 per day) and Sfax (100,000 m3 per day). The North African country is also starting to reuse its wastewater in the new city of Tunis Bay.

As in most sub-Saharan African countries, Ghana is still pursuing its goal of universal access to clean water. According to the organisation Water.org, 3 million Ghanaians still do not have a safe source of drinking water. This situation is set to change, given the various projects implemented or already delivered in this West African country.

With funding from international donors, the Ghanaian government has undertaken the implementation of drinking water projects in several localities, such as Yendi, Keta, Sekondi, Takoradi, Kumasi, and Wenchi.