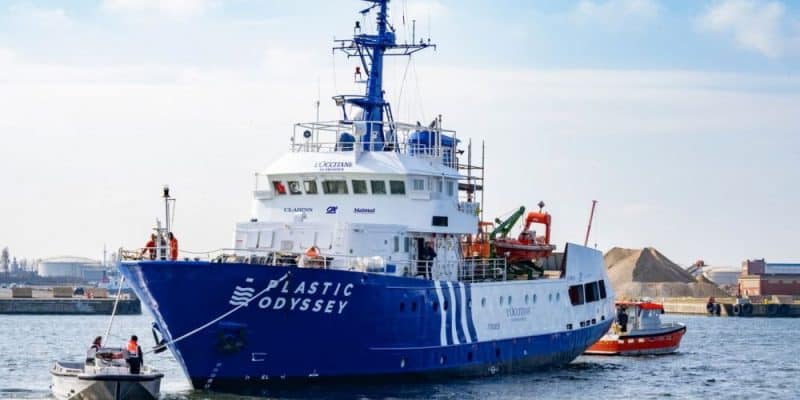 In response to the plastic pollution that is degrading the world's marine ecosystems, the ship Plastic Odyssey is embarking on a circumnavigation of the globe, including Africa, to raise awareness of sustainable plastic waste management. The three-year expedition begins at a time when coastal industries have recovered from the restrictions of the Covid-19 pandemic in Africa.

The Plastic Odyssey organisation was formed in 2018 after French merchant navy officer Simon Bernard found that 20 tonnes of plastic was being dumped into the world’s oceans every minute. It is in the same context that the Plastic Odyssey ship is currently sailing through some 30 countries heavily affected by plastic pollution, particularly in South-East Asia, South America and Africa.

The Plastic Odyssey expedition, which will end in 2025, is targeting stormwater systems, rivers and port facilities, where plastic waste is concentrated before being scattered at sea. At each port of call, the boat’s crew will raise awareness of sustainable plastic waste management. To this end, the international team will train 300 entrepreneurs to turn waste into useful objects such as paving stones or pipe materials.

“The Plastic Odyssey is powered by plastic waste, thanks to a pyrolysis system, and is therefore self-sufficient in energy. On board the ship, visitors from all over the world will be able to observe the machine tools, but also visit a living space without plastic waste,” explains Maïté Abos, the director of the non-governmental organisation (NGO) Plastic Odyssey, based in Marseille, France.

Of the 400 million tonnes of plastic produced each year worldwide, about 11 million tonnes ends up in aquatic ecosystems, according to the United Nations Environment Programme (UNEP). This non-biodegradable waste has a strong impact on marine biodiversity. Faced with this situation, some countries are resorting to sustainable initiatives.

Read also-AFRICA: The Flipflopi boat explores the impact of waste in the western Indian Ocean

This is the case in Morocco, where rainwater drains large quantities of waste onto the beaches, causing marine pollution. In this North African kingdom, Green City Organisation, an environmental start-up based in Marseille, France, joined forces in mid-2022 with the Surfrider Foundation, a global association committed to protecting the coastline, to set up “D-Rain” in the city of Agadir. This is an intelligent system for collecting marine waste. This technology will also make it possible to collect real-time data on temperature, salinity, turbidity, acidity and oxygen levels in the water via a mobile application.