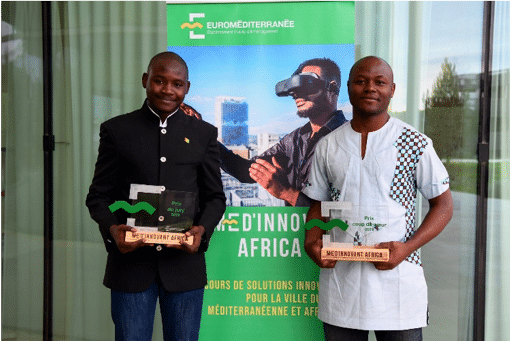 The results of the very first edition of Med'innovant Africa came out on the evening of November 5, 2019. For this pilot phase, the Cameroonian start-up Promagric was chosen as the winner of the Euroméditerannée prize. The Jury Prize was awarded to Sen'Ordur, a Senegalese company specialising in the recycling of plastic waste. Med'innovant Africa is a competition that aims to encourage young people from Africa and the Mediterranean region to come up with innovative solutions for sustainable cities.

They impressed the jury. Two Start-ups, one Senegalese, Sen Or’Dur, and the other Cameroonian, Promagric, won the “Jury Prize” and the “Coup du Coeur Prize” respectively during the final of the first edition of Med’Innovant Africa, a competition whose aim is to support the development of solutions for sustainable cities in Africa and the Mediterranean. After pitching for five minutes, their leaders were able to convince the jury, which included the heads of AFD, Africalink and Emerging Valley. The official award ceremony of the Innovative Solutions for the Mediterranean and African Sustainable City Competition took place on December 5, 2019 in Marseille.

Two promising projects for the future of sustainable cities in Africa

In Senegal, the start-up Sen’Ordur designs plastic waste collection machines that it installs in supermarkets, hospitals, university restaurants, etc. It also makes plastic waste bins available to households for which it pays for collection. To date, it has already succeeded in equipping 1000 households. Each time a user puts waste in the bin, a ticket appears and specifies the amount they will receive. A method that motivates people more to preserve plastic waste. The bins only receive plastic waste and can contain up to 500 kg of plastic waste. This specific waste is then reused in the manufacture of ecological paving stones and posts that are used as building materials. This idea earned a start-up a €5,000 budget at the end of the competition.
Promagric, a Cameroonian start-up founded by Pyrrus Kouoplong Doudjou, was the winner of the best prize. This young entrepreneur has developed an application, Clinicplant, that allows farmers to quickly diagnose plant diseases as well as to provide biological (or natural) treatments. Thanks to an artificial intelligence technology, the application carries out the diagnosis from a simple photo or video transmitted by the farmer. The application also provides advice on good practices to prevent diseases that mainly attack plants. It also includes a veterinary module for breeders. Currently, more than 200 farmers in 4 countries (Côte d’Ivoire, Mali, Senegal and Cameroon) use Clinicplant and have thus converted to a more sustainable agriculture. The application is free of charge and the business model is based on sponsorship and advertising.
For this first edition, Med’Innovant Africa received 129 applications from 22 countries. Five of them have been selected for the final phase. In 2018, Euroméditeranée opened the competition to international entrepreneurs, which resulted in the participation of 50 African start-ups. The winner in 2018 was Kouran Jabo, a Chadian start-up that offers solutions in the renewable energy sector. And it was this performance that gave rise to the idea of creating a competition specifically dedicated to Africa.
Euroméditerranée, which organises this competition, is a public development institution (EPA) that designs, develops and builds the sustainable city in the Mediterranean basin. The company is based in Marseille in the south of France.