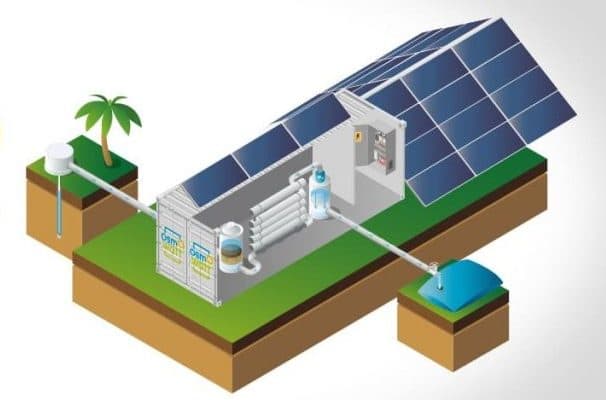 The French company Mascara Nouvelles technologies has teamed up with its compatriot Ecosun Innovation to implement a new water treatment technology called Osmo-Watt®. This containerised solution, which operates using solar energy, will be distributed in remote areas of the African continent.

Mascara New Technologies is multiplying partnerships to improve the supply of drinking water in Africa. The young French company has signed a partnership with its compatriot Ecosun Innovation to launch Osmo-Watt®. This is a new solution that makes it possible to provide drinking water thanks to an easy-to-deploy containerised system for remote and hard-to-reach areas.

The containerised system consists of Mascara’s Osmosun® technology, which enables the desalination of sea and brackish water using solar energy, and Mobil-Watt®, a containerised solar system from Ecosun Innovation that is easy to deploy. According to Mascara, the pooling of these two technologies facilitates the installation and maintenance of the solution, thus reducing costs in remote areas of Africa where purchasing power is often very low. Osmo-Watt® can produce between 5 and 100 m3 of drinking water per day using solar energy.

The possibility of hybridisation

“The container’s fully solar-powered system offers complete autonomy from any external energy supply: diesel, electricity grid. On the other hand, if necessary, Osmo-Watt® can hybridise the energy sources to produce outside of sunny hours, and thus triple the production capacity”, says Mascara New Technologies.