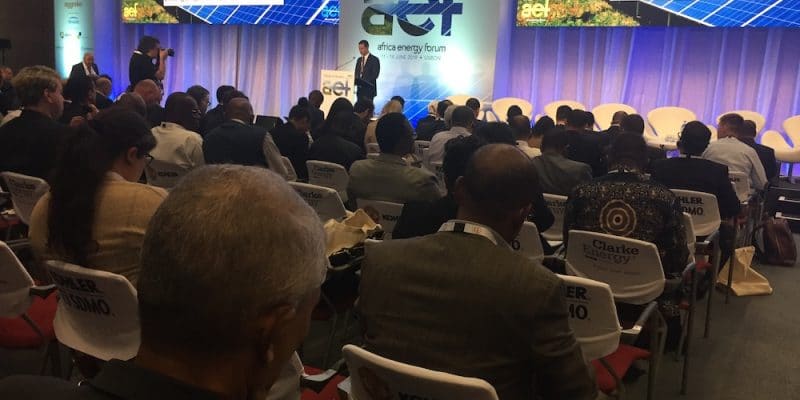 On the second day of the Africa Energy Forum (11-14 June 2019), during a round table devoted to private investment trends and IPPs (independent private power producers), which are very active in renewable energy, there was a pressing demand from all participants: let's accelerate projects! The next day, as a response to their collective frustration, a new initiative was launched by a group of enthusiastic lawyers: the open solar contract.

The Africa Energy Forum, which this year brought together public decision makers, investors, operators and everything that the African renewable energy market has to offer in terms of “deal makers” in Lisbon (Portugal), from June 11 to 14, 2019, is, by all accounts, a pretty good opportunity to do so. However, listening to the speakers at the round table on private investment trends and PPIs (independent private power producers) on the second day, it was clear that there was some frustration.

Despite this, the session opened with enthusiasm. Yasser Charafi, Investment Director at IFC (International Finance Corporation), a subsidiary of the World Bank, dedicated to private investment, painted a nuanced picture of the context, but with a kind of energy and communicative confidence.

First observation: private investment represents only 10% of total energy investment in Africa. Even if, China’s weight overshadows public investment, since the Middle Kingdom alone invests 9 billion of the 23 billion it represents.

In addition, there is the high volatility of investments: in 2017 most of the effort was focused on North Africa, while in 2018 the situation shifted completely, and it is at the other end of the continent, towards South Africa that investments flowed, thanks to new regulations in favour of the IPPs.

What Yasser Chafari sums up as follows: “private investment in energy remains driven by the existence of major programmes”in favour of renewable energies. He mentioned this again during the round table, “the combination of clear regulations in favour of private investment for the development of renewable energies, launched in a context of stability…. Well, it works. It works in South Africa, but it also works in Egypt, and also in Zambia…”

Finally, Yasser Charafi confirms it, “The renewable energy boom in Africa is no longer a revolution, it is a fact. Renewable energies have taken the lead and, overall, investments in hydrocarbons are declining.”He adds, “The development of coal is almost at a standstill and, personally, I am delighted about it, since after all, the protection of the planet remains the first issue.”He also points out that “the only traditional energy source to see its investments grow is gas.”

Moreover, at the exhibition, at the centre of the Forum, “Gas to power” is omnipresent alongside solar and wind energy. This is because gas tends to be widely used to compensate for the intermittency of renewable energies, because of its lower CO2 emissions than other hydrocarbons and because it is relatively low fixed cost structure (as for other fossil fuels) makes it easy to use as a complement to solar or wind energy. The result: many exhibitors are keen on the hybrid, a new market trend (unfortunately, still too often sold in combination with diesel).

The destructive slowness of the negotiations

Does all this point to a bright future? No, because projects come out with phenomenal slowness. This will be confirmed, one after the other, by the speakers at the round table. Like Christian Wright, Managing Director, Business Development, Head of East Africa, at Globeleq, twenty-three years of experience in Africa on the energy sector, who describes in a kind of resignation (not unfortunate) the incredible waste of projects, buried following endless negotiations. Let us judge by this: only one tenth of the projects have been signed. And even then, it often takes three long years of negotiation, when the realisation often only takes an average of one year… In fact, Globeleq, which has just completed the financial round table of the Malindi solar project in Kenya, is currently accelerating its development in South Africa… by acquiring four power plants developed by other IPPs.

The burden was so palpable that Slim Feriani, Tunisia’s Minister of Industry and SMEs, who announced that the winners of the Tunisian call for tenders for several solar power plants, with a combined capacity of 500 MW, will be appointed next September, felt obliged to justify the delay so far by setting up transparent governance, in line with the country’s new democratic requirements… And to promise that with the processes now in place, the next projects would be launched quickly under the National Renewable Energy Programme, which foresees 3,500 MW of renewable solar and wind power by 2030, to contribute 30% of the electricity mix. A rate that, given the continued decline in costs, could be revised upwards.

These promises, however, did not succeed in stirring up the atmosphere. The old deal-making truckers in Africa criticised the authorities for nitpicking down to the most implausible details, while a newly appointed minister or a newly elected executive systematically felt compelled to start from scratch to prove that he could do better than the previous one. Less is often more, though, and all the speakers ended up repeating, like a mantra: “Enough is enough”. For lost time is also a lot of money lost, on both sides. Finally, and as always, everyone finally agreed to overwhelm the absent: these lawyers who would always complicate everything and never give up…

Except that, it is precisely on the side of a group of over-excited lawyers, who have tried to think “out of the box” and sometimes even against themselves, that a solution may be emerging, with the Open Solar Contract, which was launched the next day, during another round table on the Africa Energy Forum.

The initiative led for the past three years by Jean-Pascal Pham-Ba, Secretary General of the Terrawatt Initiative, and supported by the International Renewable Energy Agency (IRENA), is based on a now consensual observation. There is a lot of money available to invest massively and profitably in renewable energy in Africa. Simply, given the delays in negotiations, we are very far from the account and the objectives of the Paris Agreement approved at COP21 in 2015 will not be met if the business as usual is continued. To change scale, it is necessary to revolutionise the way of contracting.

To do this, Jean-Pascal Pham-Ba has collaborated with more than 30 major development banks, law firms and industrial associations. At the launch of the Open Solar Contract, several law firms told how they worked together – a rare event – to offer a standard contract to professionals, which they could take over free of charge in order to accelerate and secure negotiations on the development of solar projects, in an eventual situation where they are connected to the grid with a single electricity purchaser.

For the same project, the Open Solar Contract modelled and described in a standardised way the agreements between the different stakeholders: from the government, to the company that buys back the electricity, to the financiers who grant the loans, the plant builders, the equipment suppliers and the companies that operate and maintain the installations.

One of the major issues was to find at each moment the balance point regarding risk sharing to provide a set of documents that regulates relationships in a simple, equitable and pragmatic way. Gadj Taj Ndahumba, of the African Legal Support Facility (ALSF), which advises African governments on this subject, and Stefano Mantellassi, of Solar Power Europe, the European industrial group, both applauded the initiative and validated the standardised compromise thus developed.

Details of the initiative are available here: https://opensolarcontracts.orgract.org. A site where professionals can submit their remarks and suggestions in order to feed the latest arbitration. The complete package, which ranges from the contract to the guiding principles that guided its drafting, will be available in September 2019. Everyone will then be free to use it as it stands, or to adapt it here and there, taking care to respect the general spirit and balance of power underlying each of the clauses….