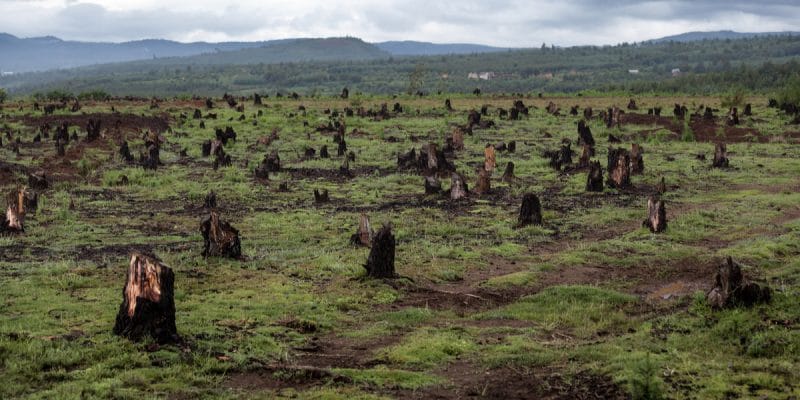 The net loss of forests continues to increase in Africa, despite initiatives, programs and policies to restore ecosystems. In a study released on September 29th, 2021, the Food and Agriculture Organization of the United Nations (FAO) and the African Union Development Agency-Nepad, reveal that the continent is losing up to 4 million hectares of forest each year.

The first-ever Africa Forest and Landscape Restoration Assessment, presented on September 29th, 2021 during Africa Climate Week, shows that much remains to be done to reverse land degradation. According to the study, up to 65% of productive land is degraded, while desertification affects 45% of land in Africa. While the overall trend is downward, net forest loss continues to increase in Africa, with four million hectares of forest lost each year.

In an earlier study, scientists highlighted Ivory Coast, Guinea and Ghana as deforestation hotspots in Africa. Between 2000 and 2020, the three West African countries lost 71%, 67% and 60% of their tropical rainforests, respectively.

Africa loses 3% of its GDP to deforestation

The Review of the State of Forest and Landscape Restoration in Africa 2021 was jointly produced by the Food and Agriculture Organization of the United Nations (FAO) and the African Union’s (AU) New Partnership for Africa’s Development (NEPAD). The study also outlines the successes to date as well as the challenges and opportunities that remain across the continent to restore land degraded by forest conversion and clearing, overexploitation of natural resources, urbanization, drought and other factors.

One success story in ecosystem restoration is noted in FAO’s Action against Desertification program, which supports the Great Green Wall Initiative, working with local communities, governments and civil society to restore degraded land in several countries: Burkina Faso, Ethiopia, Gambia, Mali, Mauritania, Niger, Nigeria, Senegal and Sudan. Between 2015 and 2020, 63,000 hectares of degraded land were planted to initiate restoration and enriched with more than 12 million seedlings and 120 tons of forest seed from more than 100 local tree and forage grass species. The program was initially supported by the European Union and has been expanded with contributions from Turkey and other donors.

“Despite our efforts, more forests are disappearing every year, costing the continent a loss of 3% of its GDP (gross domestic product). This is because degraded forest landscapes intensify the effects of climate change and are an obstacle to building resilient and prosperous communities when 60 percent of Africans depend on their land and forests,” says Abebe Haile-Gabriel, FAO’s Assistant Director-General and Regional Representative for Africa.