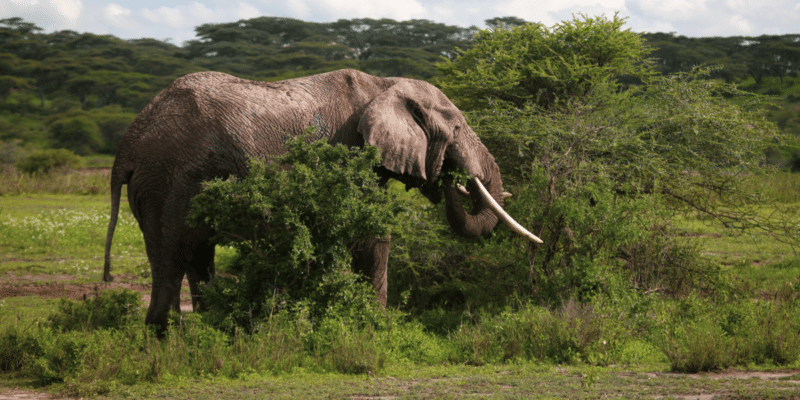 The International Union for Conservation of Nature (IUCN) has just published its new red list of animals threatened with extinction. It shows that poaching and deforestation have put the African forest elephant in "critical" danger of extinction. The population of the pachyderm has fallen by 86% in 30 years.

It is the new symbol of biodiversity decline. The African forest elephant, known scientifically as Loxodonta cyclotis, is now one of 37,480 threatened species listed by the International Union for Conservation of Nature (IUCN). The largest land mammal has been classified as critically endangered by the IUCN, which published its new Red List of Threatened Animals on March 25th, 2021.

The forest elephant, which is smaller than its savannah cousin and lives mainly in the forests of Central Africa (particularly Gabon and Congo) and West Africa, has seen its population fall by 86% in 30 years. The population of savannah elephants (Loxodonta Africana) has plummeted by at least 60% in the last 50 years and is now classified as “endangered”. “This classification should serve as a warning that if we don’t reverse the trend, we have a good chance of seeing these animals become extinct,” warns Benson Okita-Ouma of the NGO Save the Elephants and co-chair of the IUCN African Elephant Specialist Group.

Poaching and deforestation in the dock

According to the IUCN, the drastic decline in the population of both African elephant species is caused by intensive poaching and the destruction of their habitat through urbanisation and the conversion of forests into farmland. Furthermore, the coronavirus pandemic is having a negative impact on efforts to protect biodiversity. It deprives countries of ecotourism revenues that were used to partially finance the protection of nature reserves.

This rampant poaching has come about as a result of the increase in the price of ivory, which has increased tenfold between 2004 and 2018. Due to its central geographical position and colonial history, Belgium is a hub for illegal ivory trafficking. Between 2007 and 2016, Belgian customs officers seized 3,616 ivory products, says WWF. Most of these products pass through Brussels airport and are destined for China, where 79 tonnes of ivory have been seized since 2000. This is equivalent to 10,800 elephants killed!