Homepage » AFRICA: drinking water at the heart of rural development
This article is part of the dossier
WORLD WATER FORUM: SECURING ACCESS TO WATER AND SANITATION IN AFRICA

AFRICA: drinking water at the heart of rural development 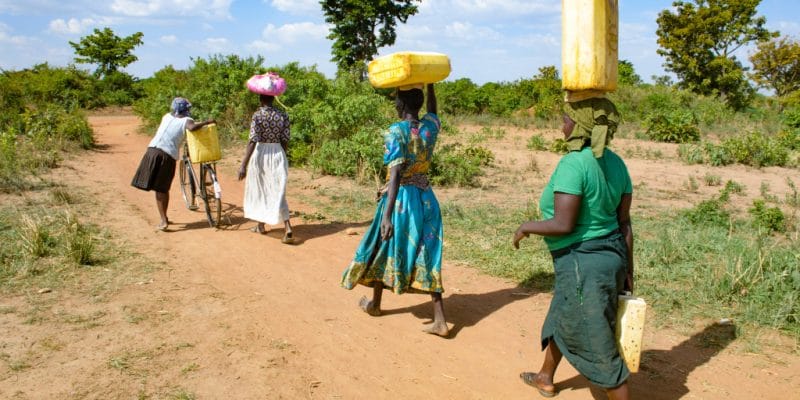 In terms of water, sanitation and electricity, rural areas in Africa are lagging behind. The problem is particularly acute in a context marked by the resurgence of water-borne diseases that are affecting several countries on the continent. On the occasion of the World Water Forum, which takes place from 21 to 26 March 2022 in Dakar, Senegal, AFRIK 21 takes stock of the evolution of access to drinking water in rural areas, the challenges to be met and, above all, the solutions available and tested in Africa.

The United Nations (UN) Sustainable Development Goal (SDG) 6 calls for universal access to safe drinking water and sanitation by 2030. But in Africa, progress is still slow. In a 2019 report, the U.N. said that access to safe drinking water in sub-Saharan Africa is just 24 percent, and basic sanitation services cover only 28 percent of an estimated population of more than 1.2 billion.

With 17 major rivers and 160 lakes that irrigate it, the African continent has abundant renewable water resources estimated at more than 5,400 billion m3 per year. However, African countries still have a long way to go and the lack of drinking water infrastructure has a particular impact on rural populations. Faced with the resurgence of water-borne diseases and the need for development to counter the rural exodus, it is becoming imperative to work on solutions adapted to each context, including the creation of new financing models. The realities are different depending on the sub-region concerned and the climate.

Africa has several ecosystems that are more or less favourable to the abundance of water resources. In the arid and semi-arid ecosystems of North Africa, the Sahel, the Horn of Africa and Southern Africa, the low rate of access to drinking water is attributed to the scarcity of the resource. For these parts of the African continent must face water stress, which is further accentuated by climate change.

According to the World Wildlife Fund (WWF), 14 African countries are already suffering from water scarcity, and it is estimated that 11 other countries will suffer the same fate by 2025. According to the organization, nearly 51% of the sub-Saharan population, or 300 million people, do not have access to quality water and 41% do not have decent sanitation.

On the other hand, the ecosystems of equatorial and tropical Africa are rather well endowed with water resources. These regions have a large number of rivers and lakes. The development of these resources requires, however, the establishment of infrastructure to exploit them.

In rural areas in Africa, especially south of the Sahara, the authorities responsible for water management rely more on drinking water supply systems (DWSS) to supply the population. These systems are also used in secondary cities and are installed in densely populated villages. A WSS consists of a smaller water intake from a river or through a borehole in the water table, a treatment plant and a tower that supplies water to the population via standpipes or household connections.

In addition to these mini-water distribution networks, human-powered pumps are used in some localities. They provide water to the population through a well. But in some African countries, such as Ivory Coast, these installations are gradually being replaced by solar-powered pumping systems.

The use of modular systems

Modular systems are becoming increasingly important in rural water management. These solutions, very often prefabricated and containerized, allow the rapid implementation of drinking water projects in rural areas. Like the Compact Degremont Units (CDU), manufactured by the French group Suez, these modular solutions allow for the treatment of both surface water and water pumped from the groundwater table. In recent years, drinking water supply projects using decentralized solutions have been deployed in West Africa, mainly in Mali and the Ivory Coast as part of the ambitious “Water for All” program.

Containerized water desalination systems are also used in rural areas in Africa, particularly in certain coastal countries subject to fresh water shortages. These systems allow the treatment of both sea water and brackish water. Often criticized for their energy-consuming nature, the promoters of these desalination solutions, mostly start-ups, are now relying on renewable energy to supply their drinking water production facilities. 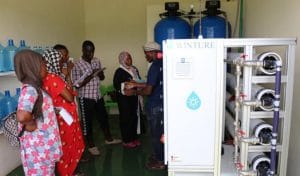 These solutions are mainly deployed in East Africa, Somalia, Kenya and Tanzania. One of the most prominent start-ups in this segment is undoubtedly the German company Boreal Light, which partners with local actors, including non-profit organizations. In recent months, the company, led by Hamed Beheshti, has increased its projects in rural areas, mainly in health care facilities, in a context marked by the Covid-19 pandemic.

The issue of maintaining water facilities in rural areas

One of the recurrent problems related to rural water supply is the maintenance of existing installations. A borehole equipped with a human-powered pump that breaks down condemns an entire village to travel many kilometers to obtain water. In several African countries, the management of water points or standpipes is entrusted to local communities. But the effectiveness of this solution is limited by the lack of resources and expertise necessary for the proper management of drinking water facilities.

In 2010, the Water and Sanitation Program (WSP), a multi-donor partnership, part of the World Bank Group’s Global Water Management Support, published the results of a study on the management of rural water supply facilities in Rwanda, Senegal, Benin, Burkina Faso, Mali, Mauritania and Nigeria. The report reveals the difficulties of community management of drinking water supplies, particularly because of the costs involved. In addition, most of the water supply systems still use diesel generators, especially in villages not yet served by a stable electricity network.

For its part, Ivory Coast recently opted to create a public entity to meet the challenge of rural water management. Announced on January 24, 2022, the National Rural Water Agency of Ivory Coast (Anahr_CI) will be responsible for guaranteeing the continuity of drinking water services in rural areas, at a time when the Ivorian government is aiming for universal access to drinking water by 2030, including in rural areas.

Anahr_CI should also enable the Ivorian government to make savings on the management of drinking water facilities in rural areas. According to the Ivorian Ministry of Hydraulics, the government spends an average of 4 billion CFA francs (more than 6 million euros) per year to cover the cost of repairing human-powered pumps. According to government forecasts, the new agency will save 80% of this budget.

Financing rural water remains the cornerstone of universal access to safe drinking water in Africa. Unlike electricity access facilities, which attract investments from public and private financial institutions, the water and sanitation sector is still struggling to find investors. However, according to a study published in 2020 by the University of Oxford (in the United Kingdom), 8 billion dollars were invested between 2006 and 2015 for the construction of one million boreholes equipped with human powered pumps in 50 African countries.

Over this period, the United Nations Children’s Fund (UNICEF) is the main financial partner with 1.7 billion invested. For researchers at the University of Oxford, the problem lies mainly in the management, which does not promote the sustainability of the facilities. Faced with this situation, researchers Patrick Thomson, Johanna Koehler, Tim Foster propose ways to resolve these difficulties, including networking drinking water production facilities for better management or the design of a financing model based on performance at the national and regional levels.