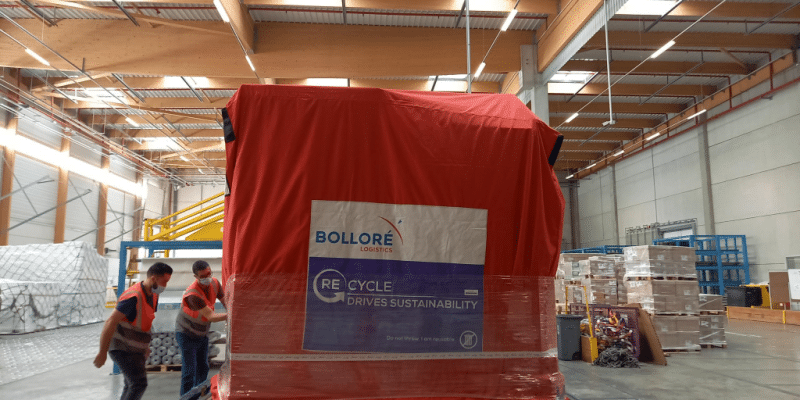 The French company Bolloré Logistics, a subsidiary of the Bolloré Group, is preparing to launch its new single-use plastic management platform called "Recycle". The development of this ecological solution for its customers is part of its corporate social responsibility (CSR) strategy.

Reusable thermal insulation kits for containerized transport, pallet covers for pre- and post-carriage of goods, and airplane pallet covers for air transport.  These are eco-responsible solutions that Bolloré Logistics wants to popularize among its customers. Through its new platform called “REcycle”, the subsidiary of the French group Bolloré intends to offer its customers the possibility of reducing single-use plastics.

“As an example, the use of reusable thermal insulation kits for 100 shipments will save 900 kg of plastic. In this way, we are already complying with the regulations that will ban the use of single-use plastics in transport and logistics,” says Odile Maarek, CSR (Corporate Social Responsibility) Director at Bolloré Logistics.

According to the company, which employs more than 19,500 people worldwide, REcycle enables the company to fully outsource the management of consumable reuse for transport and logistics, giving them the ability to check asset availability, manage inventory on a global scale and facilitate sustainable returns logistics via a dedicated web and mobile application.

An approach that supports the implementation of African legislation?

With a network of 600 agencies in 109 countries, particularly in Africa, the Bolloré Group is one of the world’s largest players in transport and logistics. The REcycle offer is in line with its CSR policy, called “Powering Sustainable Logistics”. This sustainable development strategy should enable the French company to reduce its carbon dioxide emissions by 30% by 2030. The launch of the REcycle solution comes in an African context marked by the adoption of laws aimed at reducing the use of single-use plastic.

In Rwanda, for example, in 2019, spearheaded by the Rwanda Environmental Management Authority (REMA), the country enacted Law 17/2019 on the prohibition of the manufacture, import, use and sale of plastic items and carrier bags. Fines of up to 5 million Rwandan francs (about 4,900 euros) are provided for rogue users.

In Central Africa, the Cameroonian government banned non-biodegradable plastics in 2014. This ban, which covers the import, production and sale of single-use plastic items, is in response to the observation that Cameroon produces more than six million tons of plastic waste per year, according to Greenpeace. In neighboring Gabon, only 9% of plastic waste produced is recycled.