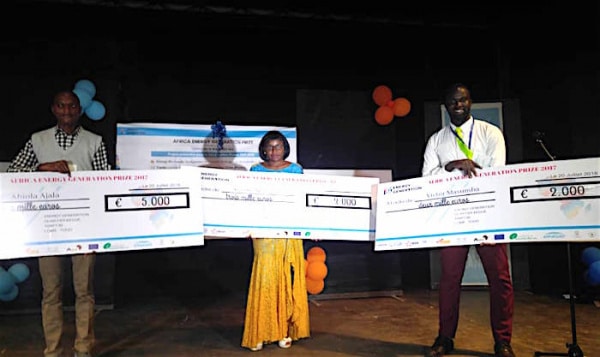 Abiola Ajala, Annette Adanmenou and Victor Masumba. These three young people were respectively first, second and third in the African Energy Generation Prize. The prizes were awarded on Friday, July 20 2018 at the French Institute in Lomé, Togo.

Sunbox received the gold award for this second edition of the energy solutions made in Africa competition. The idea, carried by the young Nigerian Abiola Ajala, consists in having kiosks equipped with photovoltaic panels which will allow the tradesmen to recharge the batteries of their telephones and to feed the LED lamps. Sunbox is a solar energy kiosk with mosquito repellent technology that protects merchants from the bites of these insects and the sun’s rays. On his Facebook account, Abiola did not fail to point out that the envelope of 5000 euros which he received is the fruit of a long work. “It’s been an impressive 10 months of work across Africa; thinking, prototyping and developing clean and affordable energy solutions to reduce the global energy deficit has been our mission over the past months,” he said.

The second place on the podium was occupied by a young lady, Annette Adanmenou from Benin. Her project convinced the jury and earned her an envelope of 3000 euros. Her simple but catchy idea offers an integrated biogas production solution that produces energy that can be used in cooking and provides biodegradable fertiliser to farmers. She named her project “Energy Bio Foods”.

Victor Masumba, the third winner of this competition, got out with an envelope of 2000 euros for his project “M.D. Hybrid Wind Turbine”. This young Zambian wants to set up a pumping system and electricity production from wind energy. A system that will enable it to respond effectively to the needs of isolated farms in Zambia.

Supporting “Made in Africa” energy projects

The African Energy Generation Prize is a pan-African competition that recognises innovation in unconventional energy sources. This initiative aims to promote and support technological innovation and social entrepreneurship at the local level. In order to detect, develop and popularise the electrification solutions proposed by Africans. “Through this competition, we want to engage young Africans in finding solutions to energy problems on their own continent,” said Astria Fataki, President of Energy Generation. To achieve this objective, the association has supported 5 energy projects in the development and marketing of their ideas. These project leaders received high-level training for ten months at the Energy Generation Academy in Lomé.

The competition was organised in partnership with Togo’s Ministry of Posts and Digital Economy and sponsors such as Scheneider Electric, EDF and Akon Lighting Africa.