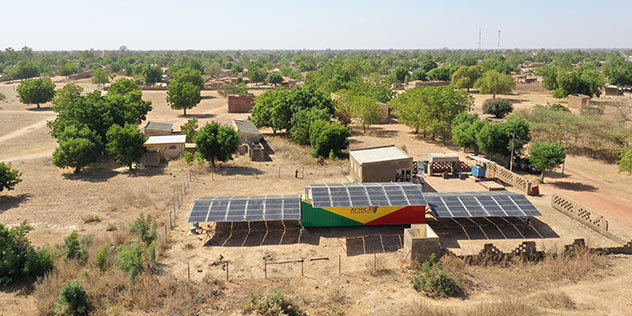 Solar mini-grid supplier Africa GreenTec has merged with Nexus Energy, a company owned by Green Climate Ventures, an impact investor based in Florence, Italy. With this transaction, the two companies hope to deploy their electricity access solutions more effectively in sub-Saharan Africa.

There is strength in numbers. Africa GreenTec and Nexus Energy have chosen to join forces in Africa. The aim of the two solar energy providers is to accelerate the deployment of their electricity access solutions in rural areas, mainly in the Sahel, where Africa GreenTec already offers its containerised solar systems.

In this part of Africa known for its relatively arid climate, Africa GreenTec is installing systems consisting of solar panels on containers, which can electrify a small village. Each system is connected to a battery system for storing the electricity needed after sunset or in bad weather. The company founded by Thorsten Schreiber and his wife Aida N’Daye currently operates 21 off-grid solar systems and three under construction in the Sahel.

The company, founded in 2016, has already secured a portfolio of containerised mini-grid projects at at least 100 sites in seven countries in sub-Saharan Africa. It will now have more weight with the experience gained over the past five years, as well as the merger with Nexus Energy, a company created in 2019 and owned so far by Green Climate Ventures, an impact investor based in Florence, Italy.

“As a result of the merger, Nexus Energy will now be fully integrated into the Africa GreenTec AG holding structure, while Green Climate Ventures will become a significant shareholder in the holding company. Founder and CEO (Nexus Energy) Claudio Pedretti will assume the role of member of the advisory board of Africa GreenTec AG. He will bring his market knowledge as well as his strategic and financial acumen to stimulate the strategic exponential growth of Africa GreenTec AG,” the two companies state in a joint statement.

The new holding company is now expected to operate in an increasingly competitive off-grid market.